Log in with Facebook
or
Wrong email address or username
Sign up
Already on BookLikes? Log in!
Incorrect verification code
Please, check your email, the code to access your BookLikes blog was sent to you already.
Enter code:
« Back Send
back to top
Search tags: twelve-tasks-of-the-holiday-season 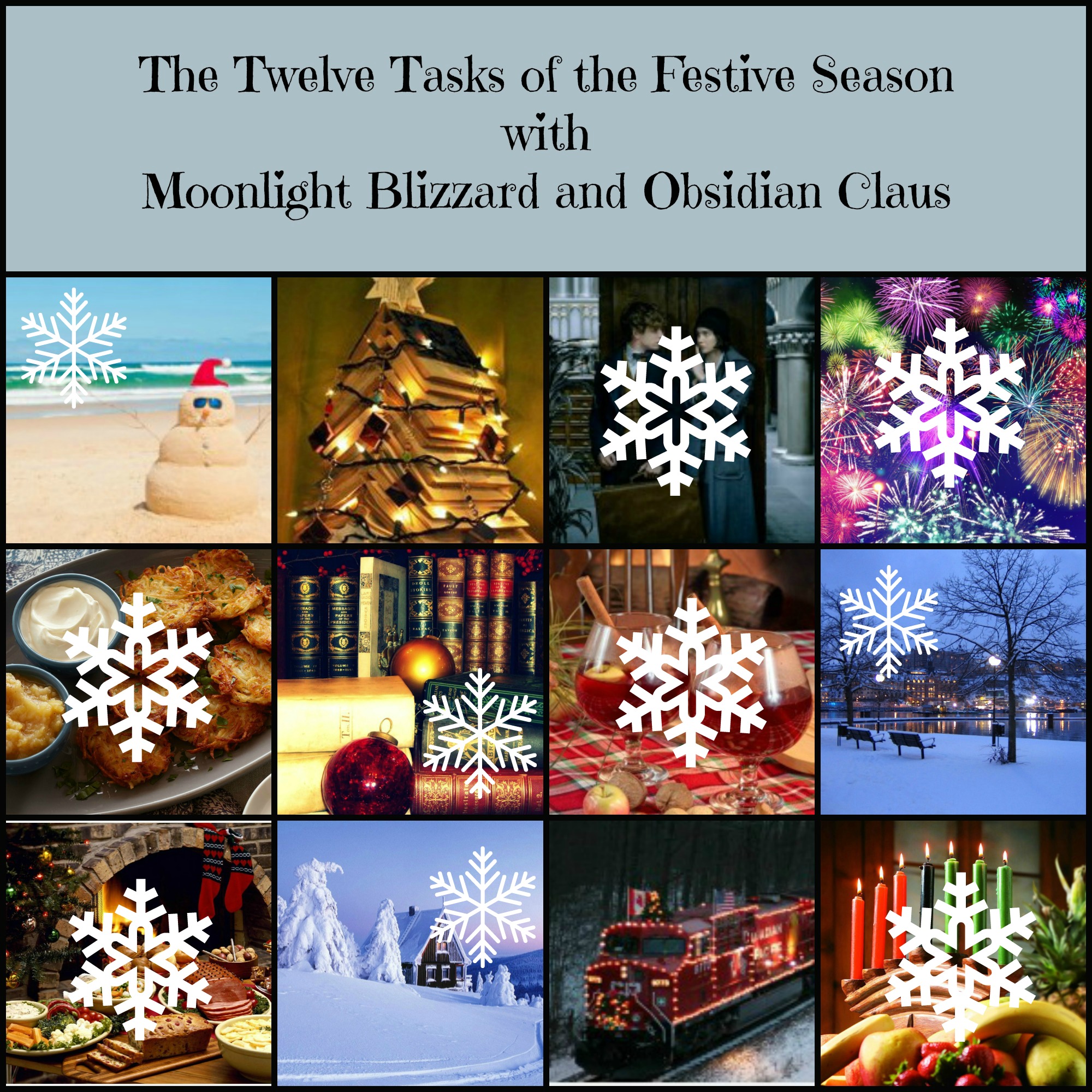 Over the last two months, I have completed 6 and 4 halves from the Twelve Tasks of the Holiday Season

Task the First: The Winter Wonderland (1/2)

- Read a book that is set in a snowy place.

My current audiobook is Beggars in Spain.  While it wasn’t picked because it is set in a snowy place and even though the weather doesn’t feature much in the first 2/3 of the book, I’m going to count it towards the first task because one of the main characters lives in Chicago and others live in the Adirondack region of NY.

Task the Second: The Silent Nights (1/2)

- Get your hygge on! Hygge is a Danish concept that relates to being content and cozy. Put on your fuzziest socks, light a candle, and spend some time (reading) in front of the fireplace or your coziest nook. Post a picture if you want!

Plenty of time this vacation reading on the couch in sweats and slippers.  Counting as half completed because I didn’t take the time away from reading to post a picture.

- Make something that is considered party food where you are from, and post a picture of it on booklikes.

- Read a book that you either received as a gift or have given as a gift.

I have read large parts of Come Late to the Love of Birds by Sandra Kasturi, which I received from Grimlock ♥ Vision.  I’m counting the task as half complete because I have neither finished the book nor posted my reactions to it.

Task the Fifth: The Kwanzaa (Complete)

- Make a small donation to a charitable organization that operates in Africa.

Task the Sixth: The Hanukkah (Complete)

- Let the dreidel choose a book for you: create a list of four books, and assign a dreidel symbol to each one (Nun = miracle; Gimel = great; He = happened; Shin = there, i.e. Israel). Google "spin the dreidel," and a dreidel comes up for you to spin. Give it a spin and read the book that the dreidel chooses!

- Make a traditional Hanukkah food like doughnuts or potato latkes. Post a picture, or tell us how they turned out!

The dreidel selected a non-fiction book The Right Kind of Crazy by Adam Steltzner.  I’m about halfway through, but just haven’t been in the mood for non-fiction since the election.

We also made Latkes on the third night of Hanukkah, but my family didn’t want me to let them get cold while I took a picture.  They come out better each year (my secret is to grate the potatoes and onions in the food-processor and then to roughly chop about 1/3 of the mixture with the main blade before squeezing to remove excess moisture).

Task the Seventh: The Christmas (Not Started)

- Read a book set during the Christmas holiday season.

- Grab your camera (or your phone) and set up a Christmas bookstagram-style scene with favorite holiday reads, objects or decorations. Possibly also a cat. Post it for everyone to enjoy!

- Go see a new theater release this holiday season (during November/December. This does not have to be a holiday movie, so yes, Fantastic Beasts will qualify).

- Every year you get a little bit older! Read a coming of age novel or any old favorite comfort read to start the new year right.

I started the audiobook of Wild Magic by Tamora Pierce on a long car ride with my son last Thursday.  This is a comfort re-read of a classic coming of age story.

Several of the other books that I read during November and December, including The Thing About JellyFish, Flying Without a Net, and Sworn to Raise, could also be considered coming of age novels. (Not surprising that I completed this task, I think at least 1/3 of what I read could be shelved under coming of age stories).

Task the Tenth: The Holiday Down Under (1/2)

- read a book you would consider a "beach read".

I’m going to retroactively consider the bit of mind-candy titled Sworn to Raise to be a beach read.

Task the Eleventh: The Polar Express (Not Started)

- Read a book that involves train travel (such as Murder on the Orient Express).

- Read a classic holiday book from your childhood (to a child if you have one handy) or tell us a story about a childhood Christmas you'd like to share.

I had intended to find the board book of Dreydl, Dreydl that I read with my children many times when they were toddlers, but it didn't happen.

- Read a book set in the UK, preferably during the medieval or Victorian periods (for those of us doing the Merlin read-along, the Crystal Cave works for this task).

Thanks again to Obsidian & Moonlight for planning and hosting the Twelve Tasks of the Holiday Season.  I had fun.  I don’t know if I will join another bingo, but will definitely be looking for more opportunities in 2017 to read a book at the same time as others and to discuss what we are reading. 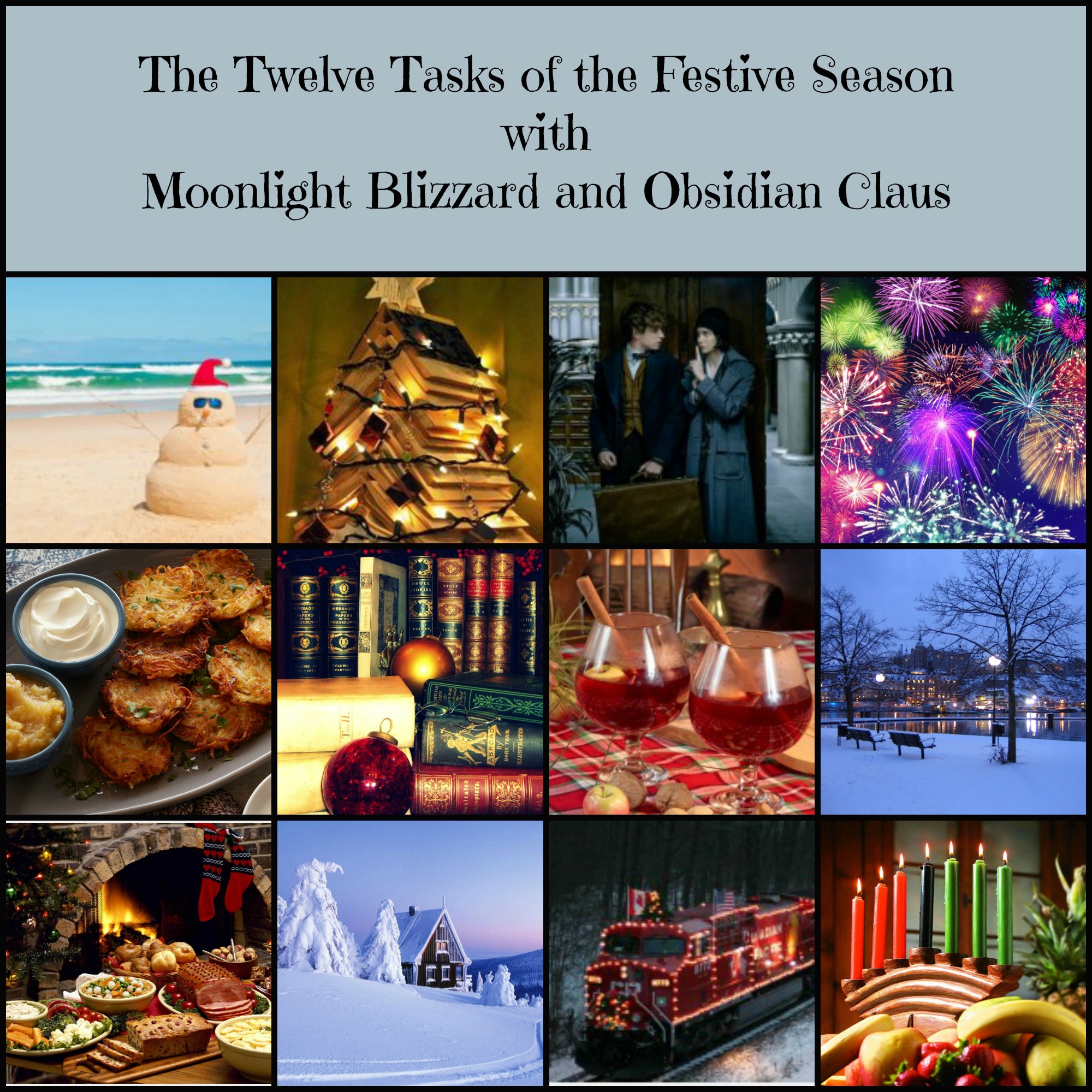 Today I completed Task Eighth: The Movie Ticket by going to see Rogue One with my husband. (We actually went on a date because my sons decided that going to the theater was overwhelming and they would rather keep watching inane videos on You-tube instead).

My husband asked that we see Rogue One in 3-D, so I finally got to my first 3-D movie. In general, I found it distracted from rather than enhanced the watching experience due to how much other than the central action of the scene was out of focus.  (I've had 2-D IMAX viewing experiences that made you feel more like you were embedded in the scene than this implementation of 3-D).

Rogue One was a great reworking of many of the Star Wars themes, and despite the heartbreaking ending, I much preferred it to The Force Awakens.

It was even more emotionally draining, because I had not been online at all today prior to going to the movie, and heard about Carrie Fisher's death as we were walking out of the theater.

The Crystal Cave Book 5 - The Coming of the Bear covers the period between the death of Ambrosius and the conception of Arthur.  Better paced than the sections covering Merlin’s youth, the end of the book wasn’t as strong as the section relating the conquest of Britain by Ambrosius.

It is over 20 years since I first read The Crystal Cave, and my sense of the book has diminished because of the reread.  While I am glad to have joined the buddy read, The Crystal Cave just didn’t hold up to the changing of writing sensibilities.  I will not be continuing with Mary Stewart’s Arthurians at this point.

And thus finishes Task the Twelfth: The Wassail Bowl - Read a book set in the UK, preferably during the medieval or Victorian periods