Log in with Facebook
or
Wrong email address or username
Sign up
Already on BookLikes? Log in!
Incorrect verification code
Please, check your email, the code to access your BookLikes blog was sent to you already.
Enter code:
« Back Send
back to top
Search tags: unexplained-mysteries Marlowe’s book about Canadian mysteries is a quick read and covers everything from Wendigo to UFOs. The book starts with a look at water monsters, such as Champ, and ends with the Shag Harbor UFO story. He covers Oak Island and headless ghosts. Vikings make an appearance as well. Despite being a short book there is quite a bit of history in this volume. Marlowe includes a biography at the end.
The stories and history are well and engaging told. Marlowe uses first hand accounts and includes, in some cases, testimony in detail boxes.

review 2016-04-06 00:00
Unexplained Mysteries of World War II: Discover the Conspiracies, Cover-ups and Coincidences that Won and Lost the War Many brief accounts on all kinds of WWII mysteries. And done well in a sober sober way. Some of the accounts even got me interested in reading more about the subjects I decided to give my kindle a go with this. It didn't even occur to me until today that I'm actually with the wrong kindle plan!! grrr as I'm with prime that only lets you lend out one book a month as opposed to 10 books to get with kindle unlimited so I'm a bit pissed off and need to decide what plan I'm going for.

Anyway, that aside, lets talk about this book!

This was a quick, interesting read into some of the famous unexplained mystery's. Some of the case's are really interesting. However, I felt reading this there could have been a lot more information shared, but sadly wasn't and brushed over. Also, some bad spelling mistakes,(I'm not one to judge at all there!) But still quite a good read. I think the author lets call them " Mysteries" as they really are called Mysteries. Should maybe next time put more information in the cases he/she presents in their book's otherwise apart from that I really liked it!

If your looking for a quick read on some famous unsolved mysteries this is your book! 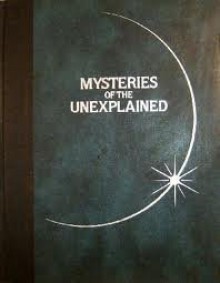 My brother Eric (yes, Eric Erekson) had a book like this when we were kids. He got it for Christmas one year, and I think I must have read it cover to cover a dozen times. I found this one at Nancy's house not long after we were married, and Karen finally gave it to me in 1993 after seeing me read it so much. It's like an encyclopedia of paranormal events, written in a kind of reportage style. Each text chunk stands on its own, so you can read as little as a fifty-word item about a horned lizard found in a block of stone, or as much as the full-page two-column ghost story of Major Stewardt of Ballechin House.

I know my reviews don't usually tip toward the educational application of books (I prefer to focus on my aesthetic experience), but this is the kind of book needed badly for readers striving to make gains as readers between grades 3-8. These brief 'text shots' are highly engaging and motivating, can stand up to multiple re-readings, but without avoiding difficult vocabulary. Kids who need a breakthrough can 'piece' their way through a small text like this without getting frustrated, and re-readings only increase their confidence and competence.

Also, Lu Benke and I have had several conversations about how these books are cataloged in libraries as non-fiction, and how the writers generally tend to use all the sourcing and text features (index, bibliography, dates, names) we would expect of a journalistic work. The book's intent is to inform--to gather and present reports of incidents as they appeared in historical source material. For many of the items, relevant photos add to this informational tone. These are key rhetorical moves, and when found in bulk in a huge volume like this the effect is to say "these things are real". The book makes no pretense of being science or historiography, but its format is that of a 'fact book'. This, despite the editors' note at the beginning disclaiming it as a simple compendium of reports for which the scientific community has no answers. This is a genre usually gaining wide circulation among young readers, but mostly unaccounted for in discussions of children's book genres.
More posts
Your Dashboard view:
Reviews All Text Photo Quote Video URL Activities
Liked posts Top Tags
Press About Terms of Services Privacy Policy Contact Us Blog FAQ Patronaty medialne BookLikes for Authors Partners panel more...
Team Themes Docs API Blogs
Copyright © 2021 BookLikes