Log in with Facebook
or
Wrong email address or username
Sign up
Already on BookLikes? Log in!
Incorrect verification code
Please, check your email, the code to access your BookLikes blog was sent to you already.
Enter code:
« Back Send
back to top
Search tags: winter-storm 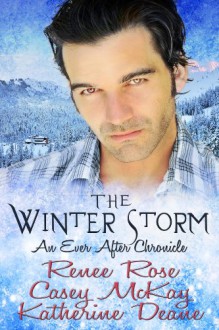 A fan of fairy tales retold, this story is great! Definitely a 3.5 star book. What amazes me about this collection is that I can't tell who wrote which part of the story. The three authors Ms. Rose , Ms. McKay, and Ms. Deane blended their stories beautifully. Each of these beloved fairy tales blended into a cohesive world surrounding a kinky resort. Betram, the wolf, runs the Spa NK lodge. It's a special one which not only caters to kinky folks, but houses paranormal creatures.

The readers is treated to Jack & Jill, Cinderella, Big Bad Wolf, a fairy and Ariel. Each character is given their own story. Some of them come to a lovely completion, others are left hanging. This gives me hope because it means another collection will be available in the future! I can't wait to read the next one in this series. It is on my must read list.

What I liked is how the trio of authors brought a fresh look to old stories. They put in their spin yet clearly keeping the enough of the original characters to make them easily recognizable for readers. It's more than just the names or variation of the character's name. It's also the distinctive characteristic of each character. For example, Coral is their little mermaid. The authors cleverly created a character who embodies the slightly ditzy Ariel from Disney. They have her behave in ways which is a nod to Ariel's innocent naivety. Coral's actions conjures up Ariel when she sings "Part of your world". This is creative and a pleasure to read.

The kink in this story is light. It's nice to see both male and female dominants. The way Cinderella is presented at Cindy is intriguing. There is more to the story and the reader becomes invested and wants to learn why Cindy is the way she is. The sex in the story is also rather tame. Still, it's sweet and good for those looking for the lighter side.

Finally, I liked the descriptions of the places. I could visually see the blizzard in the forest. The descriptions of the Lodge, apartments and dungeon were clear. Honestly, the story appeared in animation for me. It's a kinky Disney animated movie playing in my head. Recommended for fairy tale readers who enjoy a good kinky twist.