Log in with Facebook
or
Wrong email address or username
Sign up
Already on BookLikes? Log in!
Incorrect verification code
Please, check your email, the code to access your BookLikes blog was sent to you already.
Enter code:
« Back Send
back to top
Search tags: women-writers-challenge 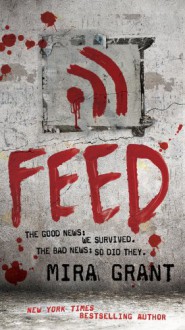 I actually decided to read this book because I was waiting for Parasitology (Grant's new book) to arrive and I thought I would see how I felt about this book since I had picked it up for uber-cheaps on the kindle..

And I'm glad I did.   This book wasn't about zombies, it was about bloggers who were busy uncovering political conspiracy/ies.  It is set in the post-zombie-lyptic landscape, but zombies are just a part of life, a background issue, like the environment or space is in other sci-fi works.

Shaun and Georgia Mason are bloggers in a post-zombie landscape.   Georgia is a "newsie", which means she likes to focus on facts and unbiased reporting, while Shaun is an "irwin" who likes the adrenalin fear of near-zombieness/death.  Their blogger team is rounded out with a girl who specializes in computers and poetry (fictional stuff).

They are awarded the opportunity to report on the campaign of a POTUS hopeful and stumble into the political landscape, with conspiracies going full bore.

It's a fun little thriller. There wasn't anything terribly original here, but an interesting way to tell the story.  I've read reviews where people were dismayed with the narration, and it's not entirely consistent, but it didn't bother me and I found it to be a decent enough fun read.

One thing - it is the first book in a trilogy, but it does wrap itself up rather tightly.  The ends are all tied in pretty little bows and you don't feel like you have to continue although there is enough left of the characters and landscape to continue the series.   I have no desire to read further, it was a nice little bite-sized-snack and enough to fill that little thrill, and I'm very happy that I can stop here (it gets an extra half-star for that alone).