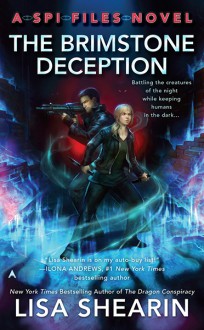 It's called Brimstone. And after the first few hits, you'll see every supernatural beast sharing the sidewalk, train, or office with you. After that, you'll start seeing the really scary stuff.

I'm Makenna Fraser, seer for the SPI. And the collateral damage caused by Brimstone is something I'd like to unsee: dead drug dealers missing their hearts—and souls. Because your local pusher doesn't stand a chance against the new cartel muscling its way into New York. And since the drug can only be produced with magic and molten brimstone fresh from Hell, that means a rift to the underworld is open somewhere in the city.

And when—not if—the cartel loses control of it, well . . .

5 years ago
http://TINNGG.booklikes.com Book Hoarders Anonymous 4.0
text
This was an enjoyable read. The h's date with the goblin, Rake, was interrupted by some business man suddenly being able to see through all the supernaturals' glamour and freaking out. Turned out this was the result of some new drug that allowed supernaturals to see through glamours and well, it w...
See review