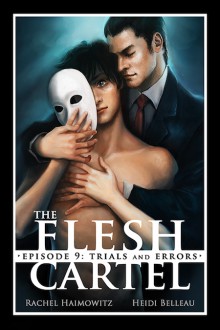 9 years ago
http://limormoyal.booklikes.com The Bookoholic 5.0 The Flesh Cartel #9: Trials and Errors
text The Flesh Cartel #9: Trials and Errors
The Moment we all feared of has arrived ... And if that is not enough for one novella you get the most significant event since the imprisonment of the brothers that ends with a fucking Cliff Hanger ... What a ride it was ...
See review

9 years ago
http://DebraE.booklikes.com Debra E's Never-Ending TBR 5.0
text
Mat is back in this episode fighting Nikolai at every step and taking the horrifying consequences. Dougie has drunk so much of the Kool-Aid, he is in love with living to serve Nikolai. He is pampered and content. Mat continues to make demands of Nikolai, who warns Mat to be careful what he asks for...
See review

9 years ago
http://Evaine.booklikes.com Evaine's Books, Books and More Books 5.0
text
Intense, intense, intense! I LOVED this look inside the minds of Dougie and Mat, seeing how they've changed and how they've not changed. I'm not certain what to think of Nikolai in all this, what his total plan is. All things point to the final episode in this season as being one helluva doozy. ...
See review

9 years ago
http://JustJen.booklikes.com JustJen 5.0
text
Another Wow! Nikolai continues to be a total bastard, not like we expect anything else by now, but still. The boys are as confused as ever as they flip flop back and forth between feelings from their other life to coming to grips with feelings from their new one. Dougie seems to be having less an...
See review
see community reviews