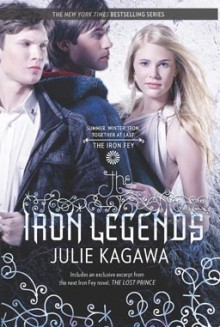 Never make a promise to a faery. They always come to collect. Now Meghan Chase must fulfill her promise to Prince Ash of the Winter Court and embark upon a dangerous journey into the heart of enemy territory—while being pursued by a relentless new foe and guarding her own foolish heart.

What can turn enemies into reluctant allies? A call from the Exile Queen, Leanansidhe, ties legendary prankster Puck to his archenemy, Prince Ash, on a journey that may end in betrayal and will set them both on an irreversible path.

Before she ever knew what she might become, Iron Queen Meghan Chase was warned by the oracle that her firstborn child would bring nothing but grief. And even as Meghan and Ash celebrate their long-awaited union, the prophecy stirs.…

Three Iron Fey novellas for the first time in print!

6 years ago
http://wyvernfriend.booklikes.com Wyvernfriend Reads 3.0 The Iron Legends (The Iron Fey, #1.5, 3.5, 4.5)
text The Iron Legends (The Iron Fey, #1.5, 3.5, 4.5)
Three stories and background information about the series.Honestly the Tir na Nog thing drags me out of the story to be honest, but it's an interesting series. The three stories are somewhat filler about the series and interesting but not necessary to follow the series.
See review

8 years ago
http://readingwolf.booklikes.com Reading Wolf 3.0
text
Finished just in the nick of time. Like an hour ago. FINAL BOOK OF 2012!
See review

Carnival Of Souls rated it

8 years ago
http://basciak.booklikes.com Book Probe 5.0
text
Just had to read Iron’s Prophecy – and I wonder what the oracle proclaimed in that would actually happen in next books of the Call of the Forgotten since The Lost Prince had none of it (maybe the end of it was a bit like it but it wasn’t what the Iron’s Prophecy suggested).
See review

8 years ago
http://speculatef.booklikes.com Speculating on SpecFic 4.0 The Iron Legends: Winter's PassageSummer's CrossingIron's Prophecy
text The Iron Legends: Winter's PassageSummer's CrossingIron's Prophecy
I like having the Iron Fey novellas in print, they look so pretty on my shelf! I re-read Winter’s Passage and Summer’s Crossing, and found I liked them both, and Iron’s Prophesy was really interesting.Winter’s Passage – Reading this took me back to a whiny Meghan and brought back all my memories of ...
See review
see community reviews