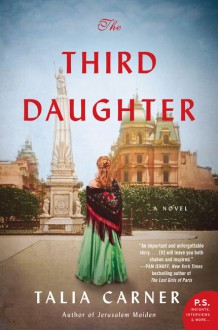 The turn of the 20th century finds fourteen-year-old Batya in the Russian countryside, fleeing with her family endless pogroms. Desperate, her father leaps at the opportunity to marry Batya to a worldly, wealthy stranger who can guarantee his daughter an easy life and passage to America.

Feeling like a princess in a fairytale, Batya leaves her old life behind as she is whisked away to a new world. But soon she discovers that she’s entered a waking nightmare. Her new “husband” does indeed bring her to America: Buenos Aires, a vibrant, growing city in which prostitution is not only legal but deeply embedded in the culture. And now Batya is one of thousands of women tricked and sold into the oldest profession in the world.

As the years pass, Batya forms deep bonds with her “sisters” in the brothel as well as some men who are both kind and cruel. Through it all, she holds onto one dream: to bring her family to America, where they will be safe from the anti-Semitism that plagues Russia. Just as Batya is becoming a known tango dancer, she gets an unexpected but dangerous opportunity—to help bring down the criminal network that has enslaved so many young women and has been instrumental in developing Buenos Aires into a major metropolis.

A powerful story of finding courage in the face of danger, and hope in the face of despair, The Third Daughter brings to life a dark period of Jewish history and gives a voice to victims whose truth deserves to finally be told.
show less
Format: paperback
ISBN: 9780062896896 (006289689X)
Publish date: 2019-09-03
Publisher: William Morrow
Pages no: 432
Edition language: English
Category:
Historical Fiction

3 years ago
http://Becky1.booklikes.com Books, Books and More Books 5.0 A little known part of history
text A little known part of history
THE THIRD DAUGHTER by Talia Carner Batya, the third daughter in a family of Jews forced out of their home in one of Russia’s endless pogroms, is married off to an apparently wealthy and kind American businessman. Unfortunately, his “America” is Buenos Aires, Argentina, where Batya is forced into a...
See review

3 years ago
http://Mishker.booklikes.com 100 Pages A Day...Stephanie's Book Reviews 4.0 The Third Daughter
text The Third Daughter
Batya and her family flee their hometown in the Russian countryside, the only survivors of another pogrom. After pushing their belongings through the countryside and living off the kindness of others, a wealthy foreign Jewish man, Reb Moskowitz enters the family's life and takes an interest in 14 y...
See review
see community reviews