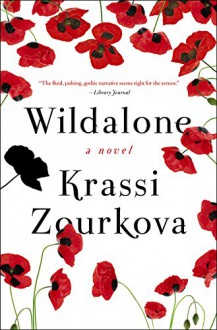 Arriving at Princeton for her freshman year, Thea Slavin finds herself alone, a stranger in a strange land. Away from her family and her Eastern European homeland for the first time, she struggles to adapt to unfamiliar American ways and the challenges of college life--including an enigmatic young man whose brooding good looks and murky past intrigue her. Drawn to the elusive Rhys and his equally handsome and mysterious brother, Jake, she ventures into a sensual mythic underworld as irresistible as it is dangerous.

In this shadow world that seems to mimic Greek mythology and the Bulgarian legends of the samodivi or "wildalones"--forest witches who beguile and entrap men--she will discover a family secret bound to transform her forever . . . if she can accept that dead doesn't always mean gone, and love doesn't always distinguish between the two.

Dispatches from Terabithia rated it

7 years ago
http://lyrrael.booklikes.com Dispatches from Terabithia 1.0 The Wildalone
text The Wildalone
Okay, I just quit this book at 50%. Our protagonist has been being stalked and controlled and repeatedly nearly raped but keeps going back like any screwed up relationship to the utter detriment of her friends and herself. I've been doing nothing but swearing at this book for the last hour, until sh...
See review

7 years ago
http://Mishker.booklikes.com 100 Pages A Day...Stephanie's Book Reviews 4.5 Wildalone
text Wildalone
Theodora Slavin grows up in Bulgaria under the watchful eye of her parents. At an early age she finds a piano locked away in her house, drawn to it's mystery and beauty Thea seems to already know how to play. Thea is allowed to continue to play, under certain conditions. Before leaving for colleg...
See review

8 years ago
http://summerreadingproject.booklikes.com Summer Reading Project, BookLikes Satellite 3.5 Wildalone, by Krassi Zourkova
text Wildalone, by Krassi Zourkova
Thea Slavin has grown up under a shadow. Fifteen years ago, her older sister, Elza, went to Princeton University and never came back. Her parents never spoke about Elza again. They kept Thea away from other family members who might have told her about her gifted, troubled sister. But then Thea is ac...
See review
see community reviews