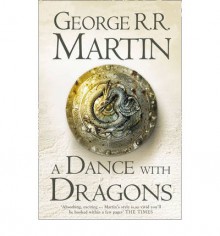 A Dance With Dragons
by: George R.R. Martin (author)

The future of the Seven Kingdoms hangs in the balance.

In the east, Daenerys, last scion of House Targaryen, her dragons grown to terrifying maturity, rules as queen of a city built on dust and death, beset by enemies.

Now that her whereabouts are known many are seeking Daenerys and her dragons. Among them the dwarf, Tyrion Lannister, who has escaped King’s Landing with a price on his head, wrongfully condemned to death for the murder of his nephew, King Joffrey. But not before killing his hated father, Lord Tywin.

To the north lies the great Wall of ice and stone – a structure only as strong as those guarding it. Eddard Stark's bastard son Jon Snow has been elected the 998th Lord Commander of the Night's Watch, but he has enemies both in the Watch and beyond the Wall, where the wildling armies are massing for an assault.

On all sides bitter conflicts are reigniting, played out by a grand cast of outlaws and priests, soldiers and skinchangers, nobles and slaves. The tides of destiny will inevitably lead to the greatest dance of all…

5 years ago
http://ToniFGMAMTC.booklikes.com Fangirl Moments and My Two Cents 4.0 A Dance with Dragons
text A Dance with Dragons
I've watched all episodes of the show through the end of season 6 so much of what is happening in this book is fairly recent on the show also. Maybe because of that, I noticed more of the differences between the show and book this go around or maybe the show just went in different directions from t...
See review

5 years ago
http://Myles.booklikes.com A Man With An Agenda 3.0 A Dance with Dragons
text A Dance with Dragons
As much as I welcomed this book on publication, I never read it again until now, and, it turns out, I retained only about half of it. 'Dance' covers the interesting characters and picks up on the viewpoints from 'Feast' as well. Unfortunately we come back to almost all of them.Martin's world still h...
See review

6 years ago
http://thebooknerd.booklikes.com Emad Attely [The Book Nerd] 5.0 A Dance with Dragons
text A Dance with Dragons
Wow! I really feel like WOW!There are a lot of events that I didn't know about, though I watched the series! Maybe this is the best book in the whole series. Full of events and drama. Recommended.
See review

6 years ago
http://FantasyReader.booklikes.com Traditional Fantasy 4.0 So yeah, I read this too
text So yeah, I read this too
I haven't posted on this site for a while, so in the meantime I read this, which brings me up to date with Martin. It gets better in this one, so I have hope for the next one. In theory it should come out next year, maybe. I just want to slap him for how he ended it though. Yeah, same as the tel...
See review
see community reviews