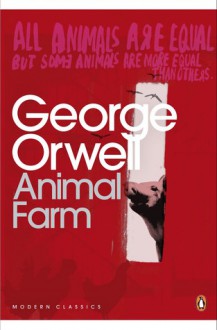 When the downtrodden animals of Manor Farm overthrow their master Mr Jones and take over the farm themselves, they imagine it is the beginning of a life of freedom and equality. But gradually a cunning, ruthless élite among them, masterminded by the pigs Napoleon and Snowball, starts to take control. Soon the other animals discover that they are not all as equal as they thought, and find themselves hopelessly ensnared as one form of tyranny is replaced with another.

'It is the history of a revolution that went wrong - and of the excellent excuses that were forthcoming at every step for the perversion of the original doctrine,' wrote Orwell for the first edition of Animal Farm in 1945. Orwell wrote the novel at the end of 1943, but it almost remained unpublished; its savage attack on Stalin, at that time Britain's ally, led to the book being refused by publisher after publisher. Orwell's simple, tragic fable has since become a world-famous classic.
show less
Format: paperback
ISBN: 9780141182704 (0141182709)
Publish date: 2000-09-01
Publisher: Penguin
Pages no: 144
Edition language: English

3 years ago
http://nicky2910.booklikes.com nicky2910's book reviews 4.5 Animal Farm by George Orwell
text Animal Farm by George Orwell
This might be one of the most popular stories, mostly read in school. And yes, I read it at school as well, but back then I couldn't appreciate this parable to its fullest. But given the developments in the last 25 years, nations risen and fallen, political systems overthrown in the hope for somethi...
See review

3 years ago
http://beyondstrangenewwords.booklikes.com Beyond Strange New Words 3.0 Animal Farm
text Animal Farm
As I understand it, the entire story of Animal Farm is one giant cynical metaphor for a failed communist utopia (because a communist utopia is a fail all of itself). It includes all the most representative tropes from mindless masses (animals) and propaganda (Squealer) to class enemies (upper class/...
See review

3 years ago
http://BookinghamFay.booklikes.com Reader & Dreamer 5.0 Animal Farm
text Animal Farm
Well worth the read, it's a very powerful story that everyone must read at some point in their lives.& We're doomed, comrades. well, the story in short was that some animals on a farm rebel, throw out the farmer and decide to run the place themselves, influenced by the old major's speech about anima...
See review

4 years ago
http://Domhnall.booklikes.com Domhnall 5.0 Animal Farm
text Animal Farm
Worth re-reading at a time when its messages could not be much more topical. From Appendix 1: Orwell's proposed preface to the first edition (not printed then)"Tolerance and decency are deeply rooted in England, but they are not indestructible and they have to be kept alive partly by conscious effo...
See review
see community reviews