Anthony Horowitz
Anthony Horowitz's life might have been copied from the pages of Charles Dickens or the Brothers Grimm. Born in 1956 in Stanmore, Middlesex, to a family of wealth and status, Anthony was raised by nannies, surrounded by servants and chauffeurs. His father, a wealthy businessman, was, says Mr.... show more

Anthony Horowitz's life might have been copied from the pages of Charles Dickens or the Brothers Grimm. Born in 1956 in Stanmore, Middlesex, to a family of wealth and status, Anthony was raised by nannies, surrounded by servants and chauffeurs. His father, a wealthy businessman, was, says Mr. Horowitz, "a fixer for Harold Wilson." What that means exactly is unclear — "My father was a very secretive man," he says— so an aura of suspicion and mystery surrounds both the word and the man. As unlikely as it might seem, Anthony's father, threatened with bankruptcy, withdrew all of his money from Swiss bank accounts in Zurich and deposited it in another account under a false name and then promptly died. His mother searched unsuccessfully for years in attempt to find the money, but it was never found. That too shaped Anthony's view of things. Today he says, "I think the only thing to do with money is spend it." His mother, whom he adored, eccentrically gave him a human skull for his 13th birthday. His grandmother, another Dickensian character, was mean-spirited and malevolent, a destructive force in his life. She was, he says, "a truly evil person", his first and worst arch villain. "My sister and I danced on her grave when she died," he now recalls. A miserably unhappy and overweight child, Anthony had nowhere to turn for solace. "Family meals," he recalls, "had calories running into the thousands&. I was an astoundingly large, round child&." At the age of eight he was sent off to boarding school, a standard practice of the times and class in which he was raised. While being away from home came as an enormous relief, the school itself, Orley Farm, was a grand guignol horror with a headmaster who flogged the boys till they bled. "Once the headmaster told me to stand up in assembly and in front of the whole school said, 'This boy is so stupid he will not be coming to Christmas games tomorrow.' I have never totally recovered." To relieve his misery and that of the other boys, he not unsurprisingly made up tales of astounding revenge and retribution. Anthony Horowitz is perhaps the busiest writer in England. He has been writing since the age of eight, and professionally since the age of twenty. He writes in a comfortable shed in his garden for up to ten hours per day. In addition to the highly successful Alex Rider books, he has also written episodes of several popular TV crime series, including Poirot, Murder in Mind, Midsomer Murders and Murder Most Horrid. He has written a television series Foyle's War, which recently aired in the United States, and he has written the libretto of a Broadway musical adapted from Dr. Seuss's book, The 5,000 Fingers of Dr. T. His film script The Gathering has just finished production. And&oh yes&there are more Alex Rider novels in the works. Anthony has also written the Diamond Brothers series. 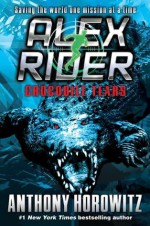 8 months ago
text A mystery of murdering of an old woman
An old woman walked into a funeral house to arrange for her own funeral. She died a few hours later, in her home. She was killed and the mystery started this way.A detective who was fired from the homicide team Hawthorne, was working as a consultant for the case.Anthony Horowitz written himself into...
See review

12 months ago
text Alex Rider latest adventure
All good and well. Jack is alive. Alex thought she died in the last book but now we found out she survived and they got a long weekend together. Alex is going back to school and be a regular boy again. So that is what we thought that is good for him. Mrs Jones is not a good person. She is now...
See review

12 months ago
text Alex go saved the world... again
Alex when to the south of France with Sabrina and met Yassen. Alex knew nothing good when he was there and followed him. In the process, he met the rich pop singer Damian Cray, en ego maniac who is actually a psychopath. Alex when to the opening of a new game and played it. He has met Cray and ...
See review

2 years ago
text Alex Rider is having a holiday and got a job with MI6 again
This is the second read. The first time is audio book which is not a format that I usually like. Now I read it again. And it is even better than as I have more details on to how he got into trouble. Alex met a rich guy who was a criminal and then covert into Christianity to fool people that he...
See review
see community reviews
Need help?