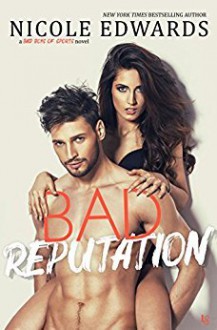 Chase: With a nickname like “Sin,” it’s no wonder they call me the bad boy of hockey. Opponents curse me. Fans scream my name—in the arena and in other, much more private places. Penalties or not, I’m not afraid to dish out a little pain. But pleasure? That’s my weakness. And no one knows it better than my best friend, Cassie Desrosiers. I’d have to be blind not to notice her rocking body and teasing grin. So when she invites me along on a trip to Vegas, my curiosity isn’t the only thing that’s aroused.

Cassie: Chase Barrett is a world-class A-hole. As his best friend, I’m allowed to call him on his BS. Who else is going to do it? Certainly not the puck bunnies swooning at every flex of his biceps. Everyone knows that Chase is the love-’em-and-leave-’em type. There’s no such thing as commitment for the king of casual hookups. So why should I care? Maybe because all work and no play makes me a sexually frustrated girl. It’s time to put the hockey stud at my beck and call to good use . . . but after a week in Vegas with Chase, I might never want to go back to the real world.
show less
Format: kindle
ASIN: B01N6OVQRJ
Publish date: 2017-10-03
Publisher: Loveswept
Pages no: 273
Edition language: English
Category:
Romance

3 years ago
http://BarkLessWagMore.booklikes.com Bark at the Ghouls 2.5 Bad Reputation by Nicole Edwards
text Bad Reputation by Nicole Edwards
I requested this book from Netgalley but I have no idea why. I am not interested in sports. I’m guessing it was the cover.I managed to get through this one despite myself. It was touch and go there for a bit, I’m not even going to attempt to pretend otherwise. Only my laziness to figure out what I w...
See review

4 years ago
http://MommaSaysToRead.booklikes.com Momma Says to Read 3.0 Slow pace
text Slow pace
Bad Reputation grabs the reader's attention pretty quickly as characters are introduced and we learn about the friendship between Chase and Cassie. The characters are interesting and the dialogue is often witty and fun. While Chase is a bad boy on the ice, I wouldn't necessarily call him that when i...
See review

4 years ago
http://suegaluska.booklikes.com suegaluska 5.0
text
Chase Barrett and Cassie Desrosiers are best friends and have been since college. They have NEVER crossed that line because they value their friendship too much, but lately they both have been secretly wondering "what if".Cassie is an executive VP for an IT company and has been selected to be the k...
See review

4 years ago
http://2kasmom.booklikes.com Kitty's Book Spot! 5.0 Everything
text Everything
Cassie and Chase have been best friends since college. There has never been anything romantic between them. Not until a crazy night in Vegas. Then it all changes. Chase has always been interested in Cassie. As a best friend, and as a woman. She thinks he is with all these other women, but he ...
See review
see community reviews