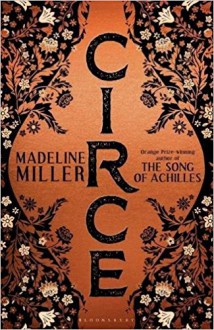 When love drives Circe to cast a dark spell, wrathful Zeus banishes her to the remote island of Aiaia. There she learns to harness her occult craft, drawing strength from nature. But she will not always be alone; many are destined to pass through Circe's place of exile, entwining their fates with hers. The messenger god, Hermes. The craftsman, Daedalus. A ship bearing a golden fleece. And wily Odysseus, on his epic voyage home.

There is danger for a solitary woman in this world, and Circe's independence draws the wrath of men and gods alike. To protect what she holds dear, Circe must decide whether she belongs with the deities she is born from, or the mortals she has come to love.

1 year ago
http://UrlPhantomhive.booklikes.com Url Phantomhive 4.0 Circe
text Circe
I was recently overcome with a strong urge to read about Greek mythology. I assume it arose since I was reading Through The Looking Glass, which starts the argument that language is dependent on culture with the absence of mentions of color in Greek epic poems like the Odyssey. If colors are mention...
See review

2 years ago
http://Elentarri.booklikes.com Elentarri's Book Blog 3.5 Circe by Madeline Miller
text Circe by Madeline Miller
This is a retelling of all the Greek Myths that involve Circe, from her perspective. There are some beautiful and poignant passages, some entertaining interpretations or inclusions of other myths (like Daedalus) but also a lot of bland sections. I'm not particularly convinced by the author's inter...
See review

2 years ago
http://yoz0ra.booklikes.com Yoz0ra Reads 1.5 Circe Review
text Circe Review
DNF: 26% [spoiler] I'm not fond of writing negative reviews, but I'm sorry to say that this story didn't sweep me off my feet.Before I started the audiobook, I read the synopsis and bits of the positive reviews. I thought that this story was for me because the story sounded so exciting. I was goin...
See review

2 years ago
http://hopefully.booklikes.com Read, Travel, Repeat 5.0 Circe
text Circe
I would give this more than 5 stars if I could! What if Circe wasn't the witch as Greek mythology recalls? Her story is expertly crafted by Miller, who could probably write an intriguing novel about watching grass grow. Read this for the story, love it for the writing. Bravo
See review
see community reviews