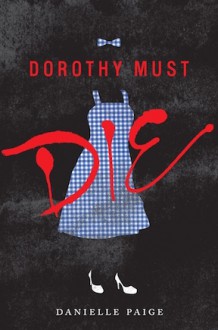 I didn't ask for any of this. I didn't ask to be some kind of hero. But when your whole life gets swept up by a tornado—taking you with it—you have no choice but to go along, you know?

Sure, I've read the books. I've seen the movies. I know the song about the rainbow and the happy little blue birds. But I never expected Oz to look like this. To be a place where Good Witches can't be trusted, Wicked Witches may just be the good guys, and winged monkeys can be executed for acts of rebellion. There's still a road of yellow brick—but even that's crumbling.

What happened? Dorothy. They say she found a way to come back to Oz. They say she seized power and the power went to her head. And now no one is safe.

My name is Amy Gumm—and I'm the other girl from Kansas. I've been recruited by the Revolutionary Order of the Wicked. I've been trained to fight. And I have a mission: Remove the Tin Woodman's heart. Steal the Scarecrow's brain. Take the Lion's courage. And—Dorothy must die.
show less
Format: ebook
ISBN: 9780062280695 (0062280694)
Publish date: 01-04-2014
Publisher: HarperCollins
Pages no: 464
Edition language: English
Category:
Fantasy, Young Adult, Fairy Tales, Retellings
Series: Dorothy Must Die 0.5 (#1)

3 years ago
http://ViragoReads.booklikes.com Bookish Blerd 4.0 Review: Dorothy Must Die
text Review: Dorothy Must Die
Let's start with, lately I have seriously had a knack for picking stories told in first person...which I hate. This was an interesting enough story that it was pretty easy to ignore. This book was dark, very dark and a teeny bit gruesome. Amy is a teenager from Kansas. She lives in a trailer, h...
See review

5 years ago
http://irresponsiblereader.booklikes.com Irresponsible Reader 2.5 Great Concept, ho-hum execution (both text & audio)
text Great Concept, ho-hum execution (both text & audio)
So, imagine a world where Baum's books (and that movie) are present and beloved -- but also, are non-fiction (not that anyone who isn't from our world gets that). I think that made sense. Anyway...in modern-day Kansas, there's a girl, Amy Gumm, who isn't having the best time. Her mother lives (well,...
See review

5 years ago
http://bibliomaniareads.booklikes.com Biblio Mania Reads 5.0
text
Let me start off by saying: If there were more than 5 stars to rate this book, I would rate it 10 out of 10 stars. First, the cover is amazing to look at. The word "DIE" across Dorothy's dress made me want to read it even more. The concept of the book is STUNNNING. The only downside I have about thi...
See review

6 years ago
http://SpookyReading.booklikes.com Spooky Reading 5.0
text
This book was a crazy ride of twists and turns. Paige’s alternative Land of Oz is truly one that comes from nightmares. The nice and sweet Dorothy, the girl from Kansas, is back in Oz but now she wants all the magic that Oz has to offer. Amy Gumm is not your typical girl from Kansas with pink hair a...
See review