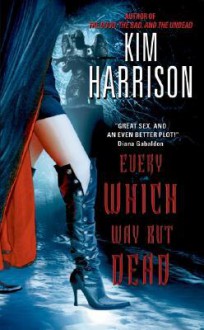 Every Which Way But Dead
by: Kim Harrison (author)

Some days, you just can't win. Witch and former bounty hunter Rachel Morgan's managed to escape her corrupt company, survive living with a vampire, start her own runner service, and face down a vampire master. But her vampire roommate Ivy is off the wagon, her human boyfriend Nick is out of town indefinitely and doesn't sound like he's coming back while the far-too-seductive vampire Kisten is looking way too tempting, and there's a turf war erupting in Cincinnati's underworld. And there's a greater evil still.

To put the vampire master behind bars and save her family, Rachel made a desperate bargain and now there's hell to pay—literally. For if Rachel cannot stop him, the archdemon Algaliarept will pull her into the sorcerous ever-after to forfeit her soul as his slave. Forever.
show less
Format: mass market paperback
ISBN: 9780060572990 (006057299X)
ASIN: 006057299X
Publish date: 2005-06-28
Publisher: HarperTorch
Pages no: 501
Edition language: English
Category:
Paranormal, Witches, Urban Fantasy, Supernatural
Series: The Hollows (#3)

5 years ago
http://carolesrandomlife.booklikes.com carolesrandomlife 3.0 Every Which Way But Dead
text Every Which Way But Dead
This review can also be found at Carole's Random Life.I liked this audiobook but it was bit of a disappointment after absolutely loving the first two books in the series. This was a re-read for me but I actually didn't remember anything about it from my initial read years ago. I am actually pretty s...
See review

7 years ago
http://lcrabtree.booklikes.com Romance Reader (and Writer) 5.0
text
This is probably my favourite book of the series so far. Rachel outdid herself getting out of Al's clutches, the Kisten thing has made me happy, I like Trent now, can't remember if I ever really liked Nick, Jenks...(sigh), Ivy kicking some arse, explosions. It was non-stop action and I really en...
See review

7 years ago
http://CarolynF.booklikes.com Carolyn Cannot Live Without Books! 4.0
text
Audiobook re-read Love the narration. I felt the same about the audiobook re-read as when I previously read the book. Previous review 01/22/10So good. There was a really sad part when her boyfriend just takes off with no explanation. It's also interesting about her mixed feelings about Trent. Would ...
See review
see community reviews