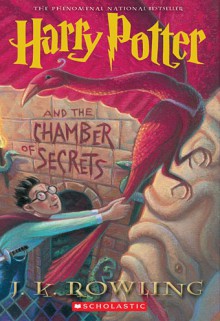 1 year ago
http://readingismyescape.booklikes.com Reading is my ESCAPE from Reality! 5.0 Chamber of Secrets - audiobook
text Chamber of Secrets - audiobook
I LOVE this series and wish I could read it again for the first time. But it has been a while since I read this one and it was fun to hear the differences from the movie. And Jim Dale never disappoints.
See review

3 years ago
http://lorimurray.booklikes.com Lori's Little House of Reviews. 4.5 Still not a favorite from the series.
text Still not a favorite from the series.
So on my YouTube channel I am participating in a readalong called potterwatch. Each month we are reading a Harry Potter book and watching the film that goes with it. Last month we did the first book and first movie. So this month it's book 2 turn. I still have to watch the movie for the book. So thi...
See review