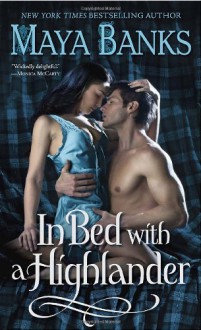 In Bed with a Highlander
by: Maya Banks (author)

Ewan McCabe, the eldest, is a warrior determined to vanquish his enemy. Now, with the time ripe for battle, his men are ready and Ewan is poised to take back what is his—until a blue-eyed, raven-haired temptress is thrust upon him. Mairin may be the salvation of Ewan's clan, but for a man who dreams only of revenge, matters of the heart are strange territory to conquer.

The illegitimate daughter of the king, Mairin possesses prized property that has made her a pawn—and wary of love. Her worst fears are realized when she is rescued from peril only to be forced into marriage by her charismatic and commanding savior, Ewan McCabe. But her attraction to her ruggedly powerful new husband makes her crave his surprisingly tender touch; her body comes alive under his sensual mastery. And as war draws near, Mairin's strength, spirit, and passion challenge Ewan to conquer his demons—and embrace a love that means more than revenge and land.
show less
Format: mass market paperback
ISBN: 9780345519474 (0345519477)
ASIN: B006UF7MUA
Publish date: 2011-08-30
Publisher: Ballantine Books
Pages no: 351
Edition language: English
Category:
Cultural, Adult Fiction, Historical Fiction, Romance, Erotica, Adult, Medieval, Historical Romance, Scotland, Medieval Romance, Fiction, Historical
Series: McCabe Trilogy (#1)

5 years ago
http://booksandthings.booklikes.com YA Fanatic 4.0 In Bed with a Highlander Book Review
text In Bed with a Highlander Book Review
This is a perfect book for a beach read and for being on vacation. It's certainly not a great book but I really enjoyed it for what it is and I really want to read the rest of the series. It starts off with Marin's abduction from a nunnery, along with a young boy named Crispin McCabe. Soon rescue...
See review

7 years ago
http://TINNGG.booklikes.com Book Hoarders Anonymous 4.0
text
Huh. Well. This was a pleasant surprise. So the h, of royal blood even if on the wrong side of the blanket, is hidden in a convent. And… she's located by a power-mad psycho (slight digression, don't like it when bad guys are psychotic) who kidnaps her and attempts to force her to marry him. Someon...
See review

8 years ago
http://Aerulan.booklikes.com Aerulan 3.0 In Bed with a Highlander
text In Bed with a Highlander
Started this one once before and had to quit at the point where the h tells the H that "he doesn't kiss right" because the abbess/mother superior whatever she was at the convent where the h grew up told her all about kissing and never said anything about tongues being involved. And of course if the ...
See review

8 years ago
http://Readinghaven.booklikes.com Heather~Reading Haven~ 5.0
text
I absolutely adore Maya Banks historical fiction. She created an amazingly realistic backdrop and provides characters with depth. This one is no different. I felt like I was part of this world and got so sucked into the story that I read until almost two in the morning without even realizing it.Mair...
See review
see community reviews