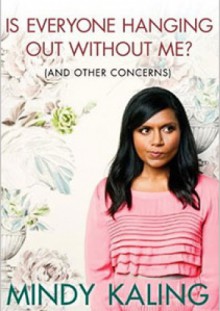 Perhaps you want to know what Mindy thinks makes a great best friend (someone who will fill your prescription in the middle of the night), or what makes a great guy (one who is aware of all elderly people in any room at any time and acts accordingly), or what is the perfect amount of fame (so famous you can never get convicted of murder in a court of law), or how to maintain a trim figure (you will not find that information in these pages). If so, you’ve come to the right book, mostly!

In Is Everyone Hanging Out Without Me?, Mindy invites readers on a tour of her life and her unscientific observations on romance, friendship, and Hollywood, with several conveniently placed stopping points for you to run errands and make phone calls. Mindy Kaling really is just a Girl Next Door—not so much literally anywhere in the continental United States, but definitely if you live in India or Sri Lanka.

3 years ago
http://RachelGoodbyeBorders.booklikes.com Rachel's books 4.0 Is Everyone Hanging Out Without Me?
text Is Everyone Hanging Out Without Me?
I've had this on my radar for awhile. Noticed the library had this on Overdrive audio and thought "I need to give that a try." So I listened to this on my commute this past week., narrated by Mindy Kaling herself. I found myself laughing out loud, she's got an excellent sense of humor. I'm a year ol...
See review

4 years ago
http://irresponsiblereader.booklikes.com Irresponsible Reader 3.0 Smart and funny
text Smart and funny
These are technically two books -- and you can identify different themes in each, but really, they could be one book, so let's talk about them at the same time. These are collections of humorous essays -- some autobiographical, some not -- from the pen of writer/actress Mindy Kaling. Is Everyone Han...
See review

Feminism in Cold Storage rated it