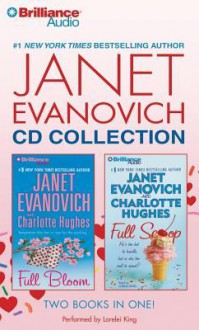 If rumors of a naughty, prank-playing ghost aren't stressful enough, a mysterious man has arrived with an eye on Annie and her master suite. Wes Bridges is all leather and denim, sporting a two-day beard, straddling a Harley, and sending the B&B's testosterone level through the roof. Annie's cool demeanor may be dropping as fast as Wes's jeans, but leave it to her missing ex-husband to dampen the passion! Turns out someone has done him in, and all evidence points to Annie! Wrapped up in a murder plot, Annie must find the killer, save her own neck, and get back to where she was - wrapped up in Wes's strong loving arms?

Full Scoop:
There's a whole lot of trouble going on in Beaumont, South Carolina. According to resident psychic-slash-astrologer, Destiny Moultrie, Mercury's in retrograde; Venus is in the seventh house, and the combination has turned Cupid wacko! Chaos rules as tempers flare and lust runs rampant. Newlyweds Max Holt and Jamie Swift-Holt are trying to make a baby, but their recently purchased antebellum mansion is under renovation and filled with feuding contractors. Vera has a crush on her new mailman, and is bent on looking ten years younger. Destiny is marked for marriage by the changing planets, and she's running for her life as the local redneck and bait shop owner is determined to make her his.

Meanwhile, local pediatrician Maggie Davenport has considerably bigger problems now that her wild-girl past has caught up in the form of an ex-boyfriend and jailbird who just flew the coop - and is determined to track her and her daughter down. If he doesn't expose her secrets, there's a good chance Jamie's editor, intent on getting the Full Scoop, will. Fortunately, FBI agent Zack Madden is on hand for protection; but the new danger is the wild attraction he and Maggie share. Fleas the hound dog is experiencing his first crush on Maggie's adorable and alluring–um–pygmy goat? Add to that an Elvis convention and a local root doctor and hoodoo practitioner who decides it's time she take charge; only to have one of her spells backfire, and you've got a gut-busting, laugh-out-loud story we hope you won?t forget!
show less
Format: audiobook
ISBN: 9781441895455 (1441895450)
Publish date: 2011-03-29
Publisher: Brilliance Corporation
Edition language: English
Category:
Humor, Romance, Chick Lit