Born into a prosperous family and having studied at the Collège de Clermont (now Lycée Louis-le-Grand), Molière was well suited to begin a life in the theatre. Thirteen years as an itinerant actor helped him polish his comic abilities while he began writing, combining Commedia dell'arte elements with the more refined French comedy.

Through the patronage of aristocrats including Philippe I, Duke of Orléans—the brother of Louis XIV—Molière procured a command performance before the King at the Louvre. Performing a classic play by Pierre Corneille and a farce of his own, The Doctor in Love, Molière was granted the use of salle du Petit-Bourbon near the Louvre, a spacious room appointed for theatrical performances. Later, Molière was granted the use of the theatre in the Palais-Royal. In both locations he found success among Parisians with plays such as The Affected Ladies, The School for Husbands and The School for Wives. This royal favor brought a royal pension to his troupe and the title Troupe du Roi ("The King's Troupe"). Molière continued as the official author of court entertainments.

Though he received the adulation of the court and Parisians, Molière's satires attracted criticism from moralists and the Catholic Church. Tartuffe and its attack on perceived religious hypocrisy roundly received condemnations from the Church, while Don Juan was banned from performance. Molière's hard work in so many theatrical capacities took its toll on his health and, by 1667, he was forced to take a break from the stage. In 1673, during a production of his final play, The Imaginary Invalid, Molière, who suffered from pulmonary tuberculosis, was seized by a coughing fit and a haemorrhage while playing the hypochondriac Argan. He finished the performance but collapsed again and died a few hours later.
show less
Birth date: January 15, 1622
Died: February 17, 1673
Website: www.site-moliere.com
Category:
Classics, Literature & Fiction 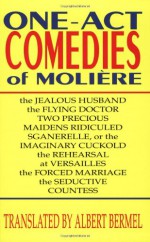 4 years ago
text Conned by a Charlatan
Isn't it interesting that there are some sectors of society that get really upset if you poke fun at them, or even criticise them in anyway. Normally this happens because these particular people are well aware that what they are doing is wrong and that they are simply playing on people's stupidity t...
See review

5 years ago
text Moliere's Big Break
First of all I have to offer out my heartfelt thanks to the friend of mine who purchased this book for me (which actually contains a number of Moliere plays, though I will be reviewing on them individually) as a Kris Kringle present. Basically I asked for a copy of The Misanthrope (and I had in mind...
See review