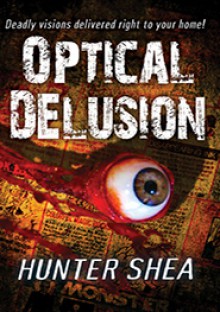 Martin Blackstone punishes his son for wasting his allowance on a pair of flimsy cardboard sunglasses X-ray vision . . . yeah, right. Martin tries them on just for the hell of it—and all they do is give him a headache . . .

Until he sees things he can’t possibly be seeing. Glimpses of things on the other side of a wall or beneath someone’s clothing. He wants to believe it’s just his overactive imagination but the “X-Ray” specs actually work. Then the fun novelty becomes a waking nightmare when the glasses burn into his face and he starts seeing horrifying apocalyptic visions no mortal man was ever meant to see. Images that alter his very personality—from a husband and father to a bloodthirsty homicidal maniac . . .

4 years ago
http://boxermommyreads.booklikes.com Horror @ Booker T's Farm 3.0 The Massacres Continue
text The Massacres Continue
"Optical Delusion" is the second installment in Shea's Mail Order Massacres novella trilogy and while "Just Add Water" remains my favorite so far, this one was still very enjoyable and a strong addition to the series. Martin Blackstone is a hardworking blue-collar worker who enjoys his time at home,...
See review

4 years ago
http://IntoTheMacabre.booklikes.com IntoTheMacabre 5.0 Optical Delusion - Hunter Shea
text Optical Delusion - Hunter Shea
Hunter Shea has tapped into our childhood for his latest offering of fear. Remember those ads in the backs of comic books? Muscles like Charles Atlas. Sea monkeys. Joy buzzers. Fake ice cubes with a fly in the middle. Gum that turns your mouth black. Oh, and the ever popular, X-ray glasses. I certai...
See review

4 years ago
http://LilynG.booklikes.com Sci-Fi & Scary 4.0 Optical Delusion
text Optical Delusion
Optical Delusion is another book in the Mail Order Massacres series from Hunter Shea. The first, Just Add Water, was a bit of bloody floof that was Creepshow-reminiscent and awesome. It was also (with a gore warning) something that 10+ year olds could read.Optical Delusion is not recommended for kid...
See review
see community reviews