Philip Reeve
Philip Reeve was born and raised in Brighton, where he worked in a bookshop for a number of years while also co-writing, producing and directing a number of no-budget theatre projects. Philip then began illustrating, and has since provided illustrations, cartoons and comic strips for around forty... show more

Philip Reeve was born and raised in Brighton, where he worked in a bookshop for a number of years while also co-writing, producing and directing a number of no-budget theatre projects. Philip then began illustrating, and has since provided illustrations, cartoons and comic strips for around forty children's books, including the best-selling Horrible Histories, Murderous Maths and Dead Famous series. It was while working on these that he wrote his first novel, Mortal Engines.Mortal Engines is a gripping adventure story set in a future world where moving cities trawl the globe. A magical and unique read, it immediately caught the attention of reviewers and book buyers. It was shortlisted for several awards and was the Gold Award winner at the Nestle Smarties Book Prize 2002 and the winner of the Blue Peter Book of the Year at the 2003 Awards.Predator's Gold is the second book in the Mortal Engines quartet, Infernal Devices the third and A Darkling Plain concludes the series to date. A Darkling Plain was published in 2006 and won the Guardian Children's Fiction Prize.In 2007, Philip took a new direction with publication of Here Lies Arthur, a story which this time looks back into history. Set in the Dark Ages, the book is a gripping adventure story and at the same time explores how a myth can be created simply through spin-doctoring and story-telling. Here Lies Arthur has received a fantastic reaction from the media and his reader fans. It was shortlisted for the Booktrust Teenage Award, the Nestle Children's Book Prize and won the CILIP Carnegie Medal in 2008.Fever Crumb, published in 2009 and set many generations before the events of Mortal Engines, was short-listed for the CILIP Carnegie Medal 2010. It was followed by A Web of Air (2010) and Scrivener's Moon (2011).Philip's most recent novels are Goblins ,Goblins Vs Dwarves, and Goblin Quest, comic fantasies about the bloodthirsty goblins of Clovenstone.Philip is also the author of a trilogy of steam-powered Victorian space adventures Larklight, Starcross and Mothstorm.In recent years Philip has begun collaborating with the illustrator and comics creator Sarah McIntyre. Their first book together is Oliver and the Seawigs, a highly illustrated adventure featuring explorers, mermaids, and moving islands, published by Oxford University Press. They have produced a follow-up, the sci-fi-and-bakery adventure Cakes in Space. Their third book together, Pugs of the Frozen North, was published in October 2015, along with Philip's new YA novel Railhead, a science fiction story set in a future where human beings live in a galactic empire linked by a hyperspace railway. It tells the story of a young thief named Zen, who is recruited to commit an elaborate robbery...Philip lives on Dartmoor with his wife and son, and his interests are walking, drawing, writing and reading. 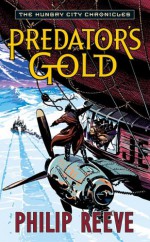 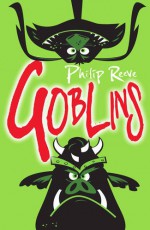 2 years ago
text Black Light Express, Philip Reeve
I struggled to re-connect to the characters in this second outing for the sentient trains and the interstellar rail network they run on and the humans they carry with them. Oddly, it's the machines, particularly Nova, the android, that I had most sympathy with. The revelations were disappointingly s...
See review

2 years ago
text Booklikes-opoly
An interesting take on the whole piratey thing. After mankind blows himself up, some cities re-build their cities with wheels so they can move around and hunt resources. By 'eating' other cities and towns. They justify it by calling it Municipal Darwinism. However, piracy by any other name is s...
See review

2 years ago
text Predator's Gold by Philip Reeve
Predator's Gold is book two in the Mortal Engines Quartet. Written as a YA book, it is easy to read, enjoyable, and has plenty of betrayal, violence, death and now a little romance. The book is again about the journeys of young Tom (now age sixteen) and Hester and their struggle to stay alive. R...
See review

2 years ago
text Mortal Engines by Philip Reeve
Mortal Engines is a simply written book for probably people 45 years younger than me, but that doesn't mean I can't read it an enjoy it, and I did enjoy it. It's not the normal series I would start and read but now I'm hooked and I'll see the series through. That is if I enjoy the next book. It's ...
See review
see community reviews
Need help?