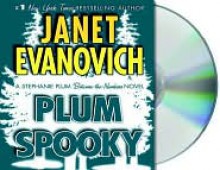 7 years ago
http://SutekoWriter.booklikes.com The best books you never read 4.5 Plum Spooky by Jaent Evanovich
text Plum Spooky by Jaent Evanovich
A fun read by Ms Evanovich. One of her novels from this series was made into a movie and I am not sure how good it was but if it was anything like this it had to be fun. In Plum Spooky we have a cast of hysterical characters and a story that mixes some paranormal with a fine mystery and procedural s...
See review