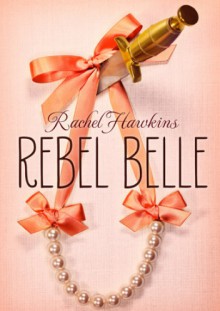 Just when life can't get any more disastrously crazy, Harper finds out who she's charged to protect: David Stark, school reporter, subject of a mysterious prophecy and possibly Harper's least favorite person. But things get complicated when Harper starts falling for him--and discovers that David's own fate could very well be to destroy Earth.

With snappy banter, cotillion dresses, non-stop action and a touch of magic, this new young adult series from bestseller Rachel Hawkins is going to make y'all beg for more.

4 years ago
http://HelEinir.booklikes.com HelEinir's Books 2.0 Rebel Belle
text Rebel Belle
It's so weird to be giving a book 2 stars and yet knowing that you might one day, mayberead the next one.This book tried way too hard to be some sort of tribute to BTVS and I don't know what else (X-men?), and didn't quite manage to pull it off.There was no depth to the characters, they were so unr...
See review

Defying Gravity with Books rated it

6 years ago
http://alylovesreading.booklikes.com Defying Gravity with Books 5.0 Rebel Belle
text Rebel Belle
I really liked this book. It had some twists and turns that I wasn't expecting. I could relate to Harper a lot except for the fact that I don't have "superpowers". I was not expecting to like this book as much as I did. Can't wait to read the next book!
See review

6 years ago
http://BagEndBooks.booklikes.com BagEndBooks 4.0 Rebel Belle
text Rebel Belle
First I'll start by saying that if I'd known this was the first book in the sequel I probably wouldn't have started it. Be that as it may, I'm sort of grateful I didn't know, because it was really good.I like Harper. I probably wouldn't have liked who she was at the start of the book, but because ev...
See review

6 years ago
http://sunsetxcocktail.booklikes.com sunsetxcocktail 0.0 Mini Reviews
text Mini Reviews
A mini review post for some of the books I finished this month but didn't feel like writing full reviews for. 17 & Gone - Nova Ren Suma - 4 Stars. This author is now on my must buy list. 17 & Gone is a strange mystery about a girl who hears and sees the ghosts of teen girls who have gone missing a...
See review
see community reviews