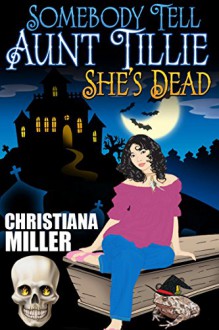 Mara is having the worst month of her life. At least, that's what her cards tell her and they've never been wrong. She's evicted from her apartment, loses her job and is banned from Beverly Hills. So when the tarot cards predict her imminent demise, she uses a little magic to make her world right.

Suddenly, an aunt she's never met dies, leaving Mara as her sole heir. But when Mara moves into her inherited home, she discovers Aunt Tillie never moved out. She's still one pissed-off old lady, even post-mortem, and she blames Mara's magical meddling for her death.

When Mara accidentally releases a demon and awakens the spirit of the most powerful witch in history, Tillie's ready to kill her -- literally. It's the only way she can think of to save the girl from herself.

9 years ago
http://nomore.booklikes.com No More Booklikes, BYE 2.0
text
I liked it, I was bored, I was on the edge of my seat, I was bored, I was interested in the inner dialog, I was so sick of hearing it, I loved the humor, I found it stupid at Inappropriate times, it built up to the sexy moment only to have it swosh done,....and WTH happened to the side characters ? ...
See review

10 years ago
http://richardderus.booklikes.com Expendable Mudge Muses Aloud 3.0
text
Rating: 3.5* of fiveThe Book Report: Mara's a thirtysomething Angeleno girl with the best kind of life a slightly portly, extremely witchy fag hag can have: Her GBFF Gus keeps her in snack food and gossip, her gay uncle/landlord keeps her in a super-cool apartment for less than market rent, and her ...
See review

10 years ago
http://stellarraven.booklikes.com Jennifer's Books 2.0 Somebody Tell Aunt Tilly She's Dead
text Somebody Tell Aunt Tilly She's Dead
This book...was kind of a mess. The premise was interesting, but the execution fell short. The whole first part of the book went on way too long and could have been shortened down quite considerably. The book was nearly half over before Mara even got to the cottage she inherited, the cottage where...
See review

10 years ago
http://Urbanfae.booklikes.com Michelle Scott, urban fantasy author 3.0
text
This book started out as a very cute chick lit with a couple of fun characters. The problem for me was that halfway through, it became really dark. There were some unusual sex scenes towards the end that left me scratching my head since the rest of the book had been so lighthearted and fun. The r...
See review