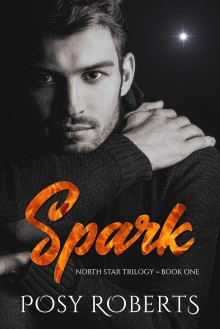 A love story with a seventeen-year intermission.

Hugo Thorson fell in love when he was sixteen. He’s maybe been in love since, but probably not. He’s been too busy directing plays to devote much time to men who can’t accept all of him. No one ever made him feel like his first love did.

Kevin Magnus married a woman and has two children, but the marriage wasn’t happy. In the shadow of divorce, he’s striving to be a better father, but he’s still a work in progress.

When Hugo and Kevin bump into each other at the lake, memories of their last kiss incite a new first kiss. Visions of the life they always wanted are vivid, but so much stands in the way of their dreams. Hugo is out and proud but no one knows Kevin’s bisexual. If Kevin comes out, he risks losing custody of his kids. If he doesn’t walk hand in hand with Hugo, he risks losing the love of his life.

The curtain may never rise on their second act.

7 years ago
http://erica.booklikes.com erica 2.5 Spark by Posy Roberts
text Spark by Posy Roberts
I don't quite know how to rate this one. The narration was fine, the story OK, but I found it a bit.... bland & forgettable somehow. It was just something to read, and it pushed absolutely no buttons. Not any of my pet peeves, not any emotional highs or lows, no annoyances, nothing. Just.... vanilla...
See review

7 years ago
http://Sheziss.booklikes.com Sheziss loves Zeshak 2.0 Spark
text Spark
I feel divided with this book. There were parts I adored here, but also there were parts I was really bored. It’s a slow burn book, in the sense of writing. Everything was done with no rush, very quietly. It’s a love story born from friendship, a story of the first love in youth, and of separation a...
See review

Romances and more... rated it

7 years ago
http://rakucopper101.booklikes.com Romances and more... 3.5
text
Premise in a nutshell: A story of two boys who find love, but then drift apart once they go to college. Years later they reconnect and find that what has been missing in their lives is each other. There's a running theme about Fathers/son's relationships and how it influences the choices they ma...
See review

7 years ago
http://AnnaLund2011.booklikes.com AnnaLund2011 4.5 Book Review – Spark, by Posy Roberts
text Book Review – Spark, by Posy Roberts
This book made me happy in ways I can’t really explain. I won't even try. You may have seen me gushing over the book Private Display of Affection, by Winter Sandberg the other day—well, this is that same book, but for adults. It is also powered by including an interwoven future storyline with the ...
See review
see community reviews