Log in with Facebook
or
Wrong email address or username
Sign up
Already on BookLikes? Log in!
Incorrect verification code
Please, check your email, the code to access your BookLikes blog was sent to you already.
Enter code:
« Back Send
back to top
Search tags: 2013-reads Several years ago, I listened to the audiobook version of Gulp.  My reaction at the time was “Fascinating, with just the right amount of yuck factor.”

I re-read Gulp during the early part of September since it was picked as the first Flat Book Society read.  The chatty, anecdotal style that worked so well for the first listen, didn’t hold up as well to a (print) re-read.  The level of detail for many of the chapters seemed more appropriate for a podcast or a newspaper article than for a book, and perhaps would have been better if encountered in episodic form with a break between sections.

My least favorite parts were the early chapters discussing the history of Fletcherism (obsessive chewing) and the 19th century experiments on Alexis St. Martin (he of the fistulated stomach), both stories I’d previously encountered.  The book picked up a bit once Ms. Roach started talking about the Oral Processing Lab at Wageningen University in the Netherlands and other recent research into the digestive process.   I particularly liked the chapter debunking the story of Jonah and the "whale." While many find the closing chapter regarding stool transplants repugnant, as someone with a delicate digestion, I found the idea of recolonizing the digestive system fascinating.

If you can appreciate potty humor and are interested in a semi-random series of tidbits loosely connected to digestion, then you might want to pick up Gulp for your next audiobook or bathroom read.

Authors have profiled the brain, the heart, the eyes, the skin, the penis and the female geography, even the hair.  The pie hole and the feed chute are mine.

It's this irreverence that I remember liking. A mysterious island. An abandoned orphanage. A strange collection of curious photographs.

A horrific family tragedy sets sixteen-year-old Jacob journeying to a remote island off the coast of Wales, where he discovers the crumbling ruins of Miss Peregrine’s Home for Peculiar Children. As Jacob explores its abandoned bedrooms and hallways, it becomes clear that the children were more than just peculiar. They may have been dangerous. They may have been quarantined on a deserted island for good reason. And somehow—impossible though it seems—they may still be alive.

A spine-tingling fantasy illustrated with haunting vintage photography, Miss Peregrine's Home for Peculiar Children will delight adults, teens, and anyone who relishes an adventure in the shadows.

First I liked to say that I kind of feel stupid when it comes to this book. Simply because I judged a book by its cover. I saw the book many times and a lot of places but just looked at the cover and thought it is another book about haunted places or so. I didn’t pay much more t attention to it until I saw the trailer for the movie and recognized it. So of course I had to go out and buy the book. Just because. I really enjoyed this kind of unique book, a book with old weird pictures but a story been written around them. I loved that even though there are many different types of pictures in this book they are all fit into the story or the story first with the pictures is more like it. I have a hard time reviewing this book, not sure what to say other than, It was great and fanatic and took me on a great magical and chilling journey. I liked Jacob, even when he had doubts he never really lost faith before he knew everything. I thought he adapted really fast to this new world he discovered I really liked all characters they all had they backstory and a part great part in this book. Of course I liked some more than others. Millard was one other characters I really enjoyed. Miss Peregrine, I liked to but thought there was still some kind of mystery to her. Overall I really loved the mix of old and modern world. We get a great look at the world 1940 but yet a lot of the modern era and how it mixes. I also thought it was one of the easier “Time travel” stories I have read in a while. Complex but yet super easy to understand and follow, which I really enjoyed. There was a great deal of action and twist in the book. It kept me captivated from the first few pages. I really liked the ending and cannot wait to see how their story continues. The only minor thing that bothered me was that I would have liked see more a conclusion with his dad. But maybe we will get more of that in the next book or book. Which I surely will pick up soon.

Some of my favorite quotes:

“I used to dream about escaping my ordinary life, but my life was never ordinary. I had simply failed to notice how extraordinary it was.”

“We cling to our fairy tales until the price for believing in them becomes too high.”

“..What an unchallenging life it would be if we always got things right on the first go.” Read in December of 2013, just updated to Booklikes-i-ness (and added pictures).

This is one of the most incredible Holocaust books I have come across to date. It is about so much more than author Gitta Sereny's conversations with Franz Stangl (Commandant of Treblinka). These conversations (conducted while Stangl was in Düsseldorf prison) give us a narrative around which Sereny integrates her exceptional research, outside interviews and experiences. Sereny manages to be both our guide and an appropriately impartial observer of the events described (and is open in describing what could and could not be verified). 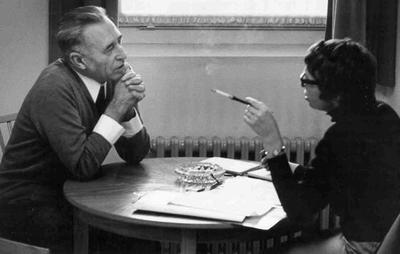 Written in 1972, this book seeks to address facts that "have become blurred" and the claims of "chroniclers...who will have us believe that the extermination of the Jews was almost an accidental development, somehow forced upon the Nazi's by circumstance" (p.93). Similarly, she disambiguates two sets of terms that have been conflated over time: concentration vs. extermination camps, and War Crimes vs. Nazi Crimes.

Stangl's retelling of his own story, I think, can best be summed up in a quote from Carl Jung:

“People will do anything, no matter how absurd, to avoid facing their own souls.”

Stangl's justifications for his role at Treblinka are remarkably similar to the findings of behavioral economists regarding the "trolley problem" wherein (pardon my terrible summary) participants seem infinitely more comfortably with hitting a switch to divert a trolley headed for five people, but that would, then kill one person than they would if they had to physically push that one person in front of the trolley in order to prevent the five people further down the track from getting killed.

In Just Babies: The Origins of Good and Evil, author Paul Bloom describes:

...this is because the thought of touching the man, of laying your hands on him and shoving, gives rise to a powerful emotional response, much more than the thought of just throwing a switch, and this is why most people see this act as morally wrong (p.169).

This concept is illustrated time and again in Stangl's perception of his actions at Treblinka. Stangl's wife, Therese, recounts a conversation with her husband she had after he received his appointment at the Sobibor extermination camp:

This theme plays again when Stangl vehemently denies having ever fired a gun into a group of people who were, hours later, gassed en mass in an operation he was overseeing.

Sereny's work also intricately examines the role of Pope Pius XII — something I previously knew little about, so if you're into that you'll enjoy that part as well.

Hopefully these passages will give you just a glimpse of myriad accounts gathered through Sereny's persistent research and access to survivors, witnesses and prisoners alike. In the time since finishing it, I have found myself referencing this book constantly, and recommend it highly. note: I read this one in October of 2013, but thought I'd bother to give it the proper Booklikes formatting since I make reference to it in a more recent review.

This book was quick and interesting, but lacked a certain je ne sais quoi for me and, at times, felt a bit "forced" in its attempt to give the relationship between its two titular characters a causal weight in the events that eventually befell the Kelley family.

Like Dr. Douglas M. Kelley (below), I am fascinated by the inner workings of the human mind. Likewise, the human capacity for evil revealed in criminology and the study of history (in particular the events of and surrounding WWII) capture my curiosity and desire to understand. Kelley and I are certainly not alone in this, and in the decades since WWII scholars from a variety of fields have sought to unravel the sociological, psychological and historical underpinnings of what happened. All of this is to say, that I did not find Dr. Kelley to be quite as exceptional as the author may have intended. 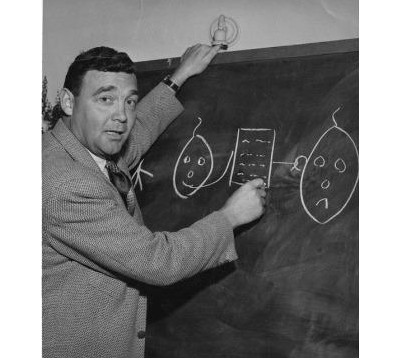 That notable figures who work with notorious criminals are often somewhat egotistical is not surprising. John E. Douglas, the original "Mindhunter," is an example that stands out (see: Mindhunter: Inside the FBI's Elite Serial Crime Unit). What author Jack El-Hai refers to as tele-empathy, "the ability to feel what others are feeling and thinking" after carefully examining them" (p.201). Seems like it would be requisite for the job. From studies such as the Milgram experiment and the Stanford Prison Study (both of which El-Hai refers to toward the end of the book), we have learned more about quotidian obedience to authority. Books such as Martha Stout's The Sociopath Next Door describe that individuals who completely lack conscience are by no means an anomaly.

The most interesting pieces of information in re. the over-the-top character of Hermann Göring which are almost unfathomably bizarre (his extreme pill addiction, his letter writing campaign to President Truman regarding the inhumane conditions in which he was being kept, his obsession with wild animals etc.) were brushed over too quickly for my liking, in favor of Kelley's family history. 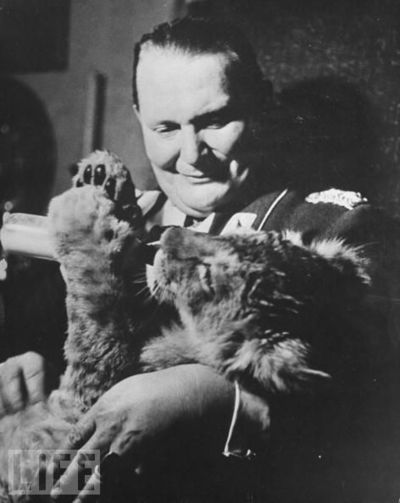 While I enjoyed this book, I feel like it could have done more. Perhaps that was not the author's intention, but somehow the parallels between Göring and Kelley failed to draw me in as stories unto themselves. Furthermore, these characteristics seemed to me less exceptional, less notable than one might believe based on this material alone. Kelley told journalists that:

"[Göring] is still the same swaggering, vain, conceited braggart he always was. He has made up his mind he's going to be killed anyway, so he's very anxious to be considered the number one Nazi, a curious kind of compensation" (p.116).

This desire to rise to the top (one that Kelley, apparently, shared with Göring) seemed, to me, unsurprising. It certainly didn't seem like a trait so noteworthy as to suggest that two men sharing it would somehow be distant reflections of one-another. I'll withhold the other "big" parallel as not to spoil anything, but I, again, thought it was a bit overstated...