Log in with Facebook
or
Wrong email address or username
Sign up
Already on BookLikes? Log in!
Incorrect verification code
Please, check your email, the code to access your BookLikes blog was sent to you already.
Enter code:
« Back Send
back to top
Search tags: A-monster-calls 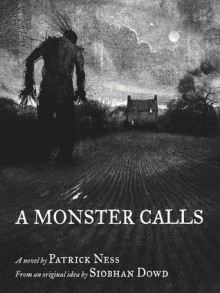 Wow. I never watched the movie, so had no idea what "A Monster Calls" was about. All in all this was a very moving book that hits you in all the right places. I do wish the ending had tied things up a bit. However, I get that the author, Patrick Ness, realized he didn't need to spell things out for the readers. We know what comes next for Conor.

"A Monster Calls" has 13 year old Conor waking up at 12:07 AM and talking to a monster. A monster that has emerged from a yew tree that sits in a church yard. The monster wants something from Conor. The monster promises to tell Conor three tales, and the fourth tale must be told from Conor to the monster.

You are going to feel for Conor. He is dealing with something that many children don't want to think about. His mother is sick and undergoing cancer treatments. It's been him and his mother since his father up and left them both to go to America and marry and have another family. Though Conor is being in the words of his mother and grandmother too perfect, he wants to do what he can in order to make things easier for his mother. However, it feels as if everyone around him knows something that he doesn't. When the monster comes to Conor to tell him his tales, you can picture the people in them. The prince and the farm maiden, the parson and the apothecary, and the man who was invisible. All of these tales will pale in consideration when Conor tells the fourth tale.

Conor's father is a weak man. I was hoping something terrible would happen to him while I was reading. His grandmother is so strong. I admired her and was glad that Conor finally saw what was going on with her. Conor's ex friend Lily gutted me a bit too. I can see why Conor was angry, but I wish that the two characters had more time with each other.

The writing and illustrations that make up this book were very well done. The darkness that Conor feels and the anger end up feeling like very alive things. Him wanting to be normal and not have everyone treat him differently because of his mother made sense to me. Even though he takes things a bit far by allowing himself to be bullied.

The flow was really good and I have to say the world building was top notch.

The ending goes where you hope it doesn't. Have plenty of tissues nearby.

I read this for Halloween Bingo 2018, the cryptozoologist square. What a moving story. Poor Conor. I wish the book had ended differently. Or maybe if we got to see Conor a year later. However, I get why the author ended the book like he did.

Going to try to get to halfway point before I go to the Book Festival. It started to thunderstorm at about 11 PM last night and didn’t let up til around 2 or so. And then it started again around 5 AM. It’s not pitch black outside, perfect day for some scary reads.