Log in with Facebook
or
Wrong email address or username
Sign up
Already on BookLikes? Log in!
Incorrect verification code
Please, check your email, the code to access your BookLikes blog was sent to you already.
Enter code:
« Back Send
back to top
Search tags: Ally-Carter I don't often comment on books but here I must. Since I am old enough to actually REMEMBER WWII, its not surprising that I no longer find books that I can honestly say 'I couldn't put it down,' or 'I wanted to read it cover to cover in one sitting.' But, Ally Carter's books still do that for me. She is one fabulous writer. And this one, Not If I Save You First, is no exception.

No, this is not revealing the story, but my only negative is there was a little too much repetition about how dangerous Alaska was. It didn't bother me that Maddie, Cammie, Katarina, and Grace (all of Ally's heroines), were pretty much the same girl, in fact, that's a plus!
Like Reblog Comment 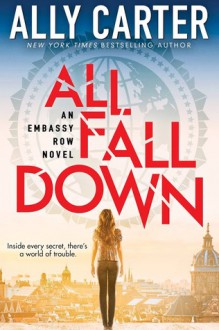 My name is Makiah i like to read mystery stories. i heard of the story during book talk and i said to myself i got to read this book. i recently read girl stolen i like it very much i think you should read it.

I'll be honest and tell you that this isn't ordinarily the sort of book I pick up and read on my own, but since I was given an early copy, I gave it a go. I'd also not read any of author Ally Carter's previous books so I couldn't compare this to any of those either. Sometimes going into a book 'blind' is actually the best thing, because then you don't have any expectations.

This fast-paced and rather short novel opens with a bang, almost literally; young Maddie and Logan are the best of friends, but they aren't really ordinary kids. Logan is the son of the president, and Maddie is the 10 year-old daughter of the Secret Service Agent sworn to protect the president's family, and the two of them are the best of friends, that is, until an incident at the very start of the book rips them apart.
Maddie has her world changed from then onwards, and she is brought to Alaska by her father to live an entirely different life. The real story begins when now-teenage Logan is sent by his dad (who is still president some 6 years later; a reminder of how LONG presidents can be in the White House) to be removed from his life of privilege because he's acting out. But Maddie isn't exactly happy about this after not having heard from Logan in all the time they were apart.
It sounds all too convenient a scenario, putting these two together again, but right away, a Russian assailant knocks out 'Mad Dog' Maddie and Logan is kidnapped. This kickstarts an adventure in the Alaskan wilderness, that shows off Logan's weaknesses, Maddie's strength of character, an exciting story, all sorts of interesting information about getting stuck outside in the snow, and a lot about not giving up in the face of adversity. I read this story so quickly because I was so caught up in the push-pull type of relationship that Maddie and Logan now had, and the thrilling adventure in treacherous snowy landscape was so compelling.
This was a fun and exciting read, and really showed off a strong female character. Made for another satisfying book, thanks to the role modeling.

*I keep reading books though, that remind why I do not want to get caught out in the snow or on mountains! Its Christmas soon and what better way to be in the festive mood than to read a book about the season of giving? So far, I had two and I pick them up one year after the other but I never read them and they were on my shelve for until last Friday I read one of them and I pick this one. So I started to read this last week Friday and managed to finished it early morning today. Here's the thing - I love short stories. They are precise, simple and short. Can be fun, dramatic, romantic and whatever that was meant to be in a genre. So when I read My True Love Gave To Me: Twelve Holiday Stories, I was looking forward to 'TWELVE HOLIDAY STORIES'. As it turns out - it should be change to 'Twelve ROMANTICHoliday stories' instead. And as I know, its under young adult and although I do want to read Christmas stories, I should have bought 'A Christmas Carol' instead. My fault because I should have known what I am getting myself into.

The question is - is this book worth reading? As you can see the rating above from this review... mehhh.

There are a total of twelve short stories here from today's known young adult authors and so far, all twelve of these stories has the same kind of formulate story you must have read or even watch on television. I mean, there are some nice funny ones and I do enjoy Holly Black, Kiersten White and Ally Carter ones but the rest, I just didn't feel it. The worst one was Laini Taylor because to tell you the truth - at the beginning of the story I had no idea what was going on. Its cheesy, its cliché and it gives no reason why the girls want to kiss the boys first. Although The Girl Who Woke The Dreamer and Polaris is Where You'll Find Me stays out of its modern themes, every single one of these stories must have 'a kiss with a guy' in any way it has to be written. Seriously, I felt it is forced upon. Why? Because... the guy is cute. That's the reason. Whether the guy is a figment of imagination, a God, an elf... the male counterpart is cute. For me, that's what I remember most.

Did I hate it? Not really. Did I love it? Not really. Its just not really the kind of holiday stories I was expecting to be cliché about. Would I recommend this? To teen readers (girls) who love cute guys. Other than that, no.