Log in with Facebook
or
Wrong email address or username
Sign up
Already on BookLikes? Log in!
Incorrect verification code
Please, check your email, the code to access your BookLikes blog was sent to you already.
Enter code:
« Back Send
back to top
Search tags: Beating War Between Delhi Police and Jamia Students : This update with respect to CAA protest is on the previous incidents which took place in the month of December 2019.

Recently the two videos from the library of Jamia University have refreshed the matter and brought into light, the truth of the Jamia incident.  What exactly had happened on December 15, when the police allegedly entered the campus without permission and were trying to arrest the unknown culprits, who had entered the campus with stones in their hands. She is a ghost: a figure glimpsed from the corner of your eye, a momentary chill, and a memory of secret kisses and hidden passion. He is 17 years old: Evan Calhoun, warm and alive, and ever since moving to this big abandoned house, he has dreamt of her. Ghost and boy fascinate each other–until her memories and his desire collide in a moment that changes them both.

Combining verse fragments with chiseled prose, A. M. Jenkins captures the compelling voice of a long–dead ghost and the perspective of a modern teen, twining mystery and romance in this evocative, sensual, and unrelentingly engrossing novel.

Evan Calhoun's parents have recently split up. Seventeen year old Evan, his mom, and little sister, all move into this previously long-abandoned mansion his mother is gung-ho about renovating as she pursues a writing career. Also inhabiting the house is the ghost of Cora Royce, who was accidentally murdered in the house at the age of sixteen many, many years ago. Something about Evan reminds Cora of her former (and only) love. Cora comes to Evan in his dreams, giving him sexual experiences that his very much living girlfriend can't compete with.

Evan's mom finds a dusty, old lock box during some of the renovations. She doesn't find much inside that interests her, so she gives it to Evan. Evan digs into the papers and photos inside. While he finds it interesting, he's also left exasperated that it only offers a few wispy details regarding the life of Cora. There is a photo of her though, which he finds himself quite drawn to, though he also acknowledges how odd it feels to lust after a face long since dead. Evan becomes so consumed and distracted with thoughts of Cora that he begins to forget to pay attention to his girlfriend, Carrie. When they do spend time together, either Evan just seems to want to get right to having sex at the start of each visit, or he's annoyed with Carrie because he feels she's developed this habit of nit-picking every aspect of their relationship. From time to time, there are scenes between Evan and Carrie that Cora shows the reader mirror the more difficult aspects of the brief relationship Cora had with her love interest. 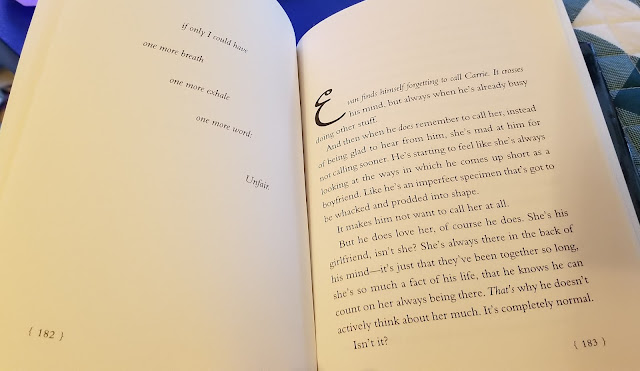 There was potential here for a pretty neat paranormal story, but the main faultline in the writing is that for such a short book, so many ideas were started but never fully developed. The flow felt clogged with a jumble of plot scenarios the author presented but never entirely followed through on... almost like listening to someone share a pretty good story but then switch topics entirely abruptly, never returning to the main thought. It makes for an aggravating reading experience, for sure.

Weirdly, the main emphasis is put on sex. SO much time is spent illustrating raging teenage hormones. Things become complicated when Evan feels torn between conflicting emotions he's having for both his living girlfriend, Carrie, and the spirit of Cora. Evan decides to have a serious sit-down chat with Carrie (not bringing up Cora, just a "where we stand" kind of talk), and not surprisingly does not handle the situation all that well. 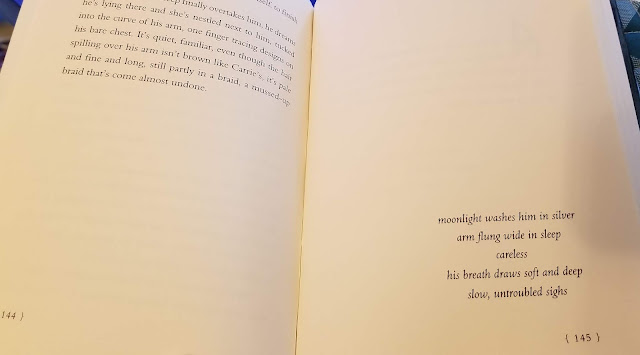 For most of the story, I wasn't connecting with any of these characters. The writing overall is good, and Evan's little sister, Libby, is very cute in her innocence about the world... and I did feel sad for her, the way she often so desperately wanted just a little attention from anyone.... but the story didn't really tap into my feels until the sit-down scene with Carrie. Evan's growing emotional distance from her means she's forced to experience some pretty tough emotional territory. These are emotions and experiences that are difficult for anyone at any age in a committed relationship, but wow, especially hard at sixteen when most don't yet have the luxury of developed emotional maturity to fall back on to help get them through such hurdles. Everything feels so much more immense at sixteen. But considering the bombshell she's given, I thought Carrie handled it all with admirable grace & dignity.

If you're a GAC fan and remember the Valentine's Day special years ago (one of my all time favorite episodes), this story kinda gave me Zak & Jerusha vibes ... but in YA form LOL

WARNING: This book has one girl and four vampire rockstars and they are ready to claim her as theirs.
Ivory Bennett has a gift.
She can shield the innocent from supernatural influence, but is it as simple as it seems?
Vampire rockers Beaten Hart hire her to protect their crew and fans, but who would protect their hearts from her?
When Ivory’s gift turns out to be a lot more than anyone could imagine, and darkness threatens to pull her under, can Slate, Rush, Zeke and Caspian protect her, before the worst happens?
This book is a reverse harem (one woman, four guys) contains sexual content and mature language. Recommended for 18 and over

J.L. Ostle was born in Antrim, Northern Ireland, now living in Carlisle, England. J.L. Ostle is a full time mother looking after her cute, active little boy. When she she hasn't got her head stuck in a book or writing, she's watching movies, or doing activities with her friends and their children.
Social Media Links: Facebook | Goodreads | Amazon

Other Books by J.L. Ostle: All I can say is, man, I wish J.M. Hirsch packed MY lunches.

Instead, he wrote a photo-heavy book so you can pack your own lunches the way he would do it. I was surprised that this is not a "cookbook" in that it does not have any actual recipes. Instead, it's full of photos of lunches with little notations about what's in the lunchbox so that you can duplicate it on your own and give it your own style. So it's really more a book of "ideas," which, once I got over it not being a traditional cookbook, I found that I liked, since I was mostly looking for ideas, anyway.

However, I don't believe for a moment that these lunches actually only take 10 minutes to put together. Still, if you're looking for some drool-worthy inspiration to make lunches for yourself or someone else, this book is a fun place to start. No need to have school-aged kids to enjoy it, either -- I looked for ideas for lunches for my husband, and most of the ideas are sophisticated enough to appeal to an adult palate. Amazon Get Yourself Some Link