Log in with Facebook
or
Wrong email address or username
Sign up
Already on BookLikes? Log in!
Incorrect verification code
Please, check your email, the code to access your BookLikes blog was sent to you already.
Enter code:
« Back Send
back to top
Search tags: Case-Histories 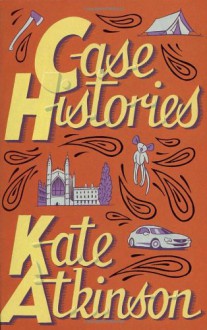 I´ve made a bit of headway in this book and I´m not sure if this book is one for me:

1) Everyone is pretty messed up, some of them to the point pf being incredibly annoying.

2) There is not a single woman in this book that behaves in a normal way. Not a single one.

I´m honestly not sure what to do with this book.

I´ve made up my mind and I´m definitely more in the mood for the Atkinson book at the moment.

The only other book I have read by this author was "Life after Life", a book which I didn´t like in regards to the story. But man, her writing style has been amazing in "Life after Life" and it is an amazing one in "Case Histories" as well

Within a few pages Atkins has brought a whole family to life, with it´s problems, trials and tribulations and each member of the family feels like an individual with thoughts and feelings. And she does this with so much ease and a sense of humour, it´s really a joy to be reading her books for her writing style alone. I do hope, though, that this time I´m going to like the story as well. 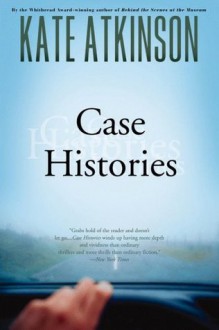 I went back and forth on this one. I think in the end that one of the story-lines that we get introduced to ends up making no sense and was just used to introduce a character who would become important later. Two of the case histories I thought were done very well. That said, I ended up not liking a good portion of the characters we meet except for Jackson and Theo. Everyone else...eh. I also don't know if I liked the ending that much either. The pacing of the book was so slow too. Since we kept coming back certain cases and people you just didn't get for a while what was going on.

"Case Histories" follows three cases that will be important later. Case 1 has a family on the brink of disaster it seems (the Lands) the youngest Land, Olivia, is beloved by all and then one day she disappears. Case 2 follows a man who loves his daughter Laura to distraction. However, tragedy occurs and he is left a decade later to mourn her. Case 3 has a wife who in a fit of fury takes an ax to her husband.

Then the book moves onto Jackson Brody. A retired police officer, Jackson is now a private investigator. He barely seems to make any money though and mostly sits around feeling angry that his ex-wife left him for another man. He wants his life back the way it used to be, but doesn't see that happening. Jackson has a demanding client (who never pays) that wants him looking into her disappearing cats, Theo who wants to find the man who murdered his daughter, and then the older Land sisters who find a clue about what may have happened to their sister who want Jackson to investigate.

Atkinson follows what I would consider the primary characters in third person POV Jackson, Amelia Land, Theo, and a woman named Caroline. I don't know if I have much to say besides Jackson apparently wants to do good things, but seems to be a terrible private investigator. Ameila Land is obsessed with her sister's sexuality (Julia) and finds herself attracted to Jackson. Too bad Jackson finds her not attractive and finds himself thinking about Julia. Theo feels badly that he doesn't love his remaining daughter as much as the one that is lost to him. He can't let go of finding out who the man was that killed her. Caroline seems weird at first and you don't tie into who she is until almost the end.

The writing was fine, it just felt like the big as flip flopping back and forth to everyone too much. I just wanted to stay with Jackson and didn't want to keep seguing back to Amelia, Theo, and Caroline every other chapter. Also some of the characters I just didn't like such as Caroline. I initially was not too impressed with Jackson until Atkinson reveals his case history. Then I felt really sorry for him. And I ended up dislking his ex-wife everytime she popped up in the book. One wonders how are things going to be now with how Jackson's life is changed at the end of this book. I did end up liking Theo the best of the characters and felt indifferent towards Amelia.

The book setting changes several times over. Case 1 takes place in the 70s, I think case 2 was the 90s and case 3 was the 80s. Then we are back in the present day with Jackson investigating or mostly obsessing over his ex and worrying about his 8 year old daughter.

The ending for some of the cases was good I thought. One was confusing and disappointing to me. I also thought that the ending for Jackson danced on the absurd and I am curious on how the rest of the series is supposed to go.

I don't think that one of the story-lines made much sense. And everyone in this book seemed absolutely miserable. Didn't grab me that much. I may read the second book to see if it is more interesting or what though. I did like the case histories and the fact you find out what happened.

Recommended by Laura, on Goodreads. I’m quite a fan of classical mystery and detective stories, but I try not to read too many of them at once so I won’t find them too repetitive.

Synopsis: A middle-aged former policemen current private detective is hired to investigate the disappearance of a girl some 20 years ago. During this investigation, he gets involved with other histories of other crimes.

Overall enjoyment: It was pretty good. The ending was not as good as the beginning, but still a nice read.

Plot: It was interesting enough, but maybe it could have been better, especially in the end. One of the “case histories” that give the book its name is not very well concluded or connected to the story. She does give the reader the answer, but there’s no closure, very little character development (exclusively in this mini story arc), no satisfying of needs… It just hangs like a big loose thread. Plus, for a detective, Brodie does very little detecting: things spontaneously happen around him, and the clues fall in his lap with no big effort in his part. Since the book tells the story of cold cases, this is at least a medium-serius issue.

Characters: Solid and well constructed. Very nice elements in regards to feminism and the development of female psyche.

World/setting: It doesn’t have a big influence in the story, except, perhaps, the house where his clients lived when they were children.

Writing style: It flows nicely and is pleasant to read. She could do a bit more suspense, though, instead of having things happen very conveniently.

Representation: There is the standard black guy and a bisexual woman. Could be better, but it’s better than most.

Political correctness: Her female characters are very real, especially in the way they think and react. There are examples of this throughout the text, but the most memorable is one of Brodie’s clients, feeling disgusted with herself, thinking that she was never pretty and when she was a child she wasn’t even attractive enough to be raped by her father. It sounds absurd when you talk about it, but that is the extreme to which the obsession with female beauty and compliance with standards takes us. Also, her men are, mostly, guys whose hearts are in the right place but just don’t get it. They react to the threats that women face with attempts to hide and protect them. As infuriating as it may be, I’m sure we all know plenty of men like that…