Log in with Facebook
or
Wrong email address or username
Sign up
Already on BookLikes? Log in!
Incorrect verification code
Please, check your email, the code to access your BookLikes blog was sent to you already.
Enter code:
« Back Send
back to top
Search tags: Christmas-Wishes ... and Happy Holidays, which- and however you're celebrating.

May your holiday week be filled with much love and great books! ... and Happy Holidays, however and wherever in the world you are celebrating them, from TA, Sunny and Charlie. (Sunny and Charlie say, "this is as Christmas-y as we're willing to get.  If you want kittens wearing Santa bonnets, you'll have to make do with these guys again!") 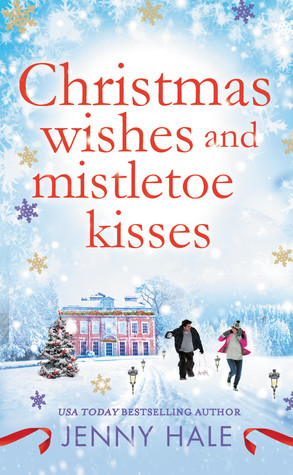 A captivating and delightful holiday romance. Jenny Hale hit the spot with this book the loving warmth of the holiday spirit, finding true love and finding out what's most important in life. It has the right amount of holiday cheese ( I love the cheesiness of Christmas movies) without it getting too cliched. Nick Sinclair was an obvious Scrooge but showed signs early on of being redeemable. Abby Fuller's pregnancy put her dreams of being an interior designer on hold but now her son is older and her grandfather's Parkinson's getting worse any extra money would be great, so when one of her in-home nursing patients recommends decorating her grandson's house Abby would be foolish to turn it down.

Nick's father died young and left the company to Nick. Nick feels a sense of obligation to make sure the company is successful, as a result Nick becomes an even worse workaholic than his father to the point it ruined his first marriage and his relationship with his mother. Nick has an instant attraction to Abby and he's patient and kind to Max, her son, he finds himself constantly distracted by them and spending as much time as he can just being with them. Nick feels like he's being pulled in two directions his want to be with Abby and his obligation to work. Nick needs to figure out what's more important to him before he loses his chance with Abby for good. Abby didn't intend to fall in love with Nick but when he makes time for her and Max in his busy day and takes time to text and call her it's hard not to see the wonderful man he is but he keeps running hot and cold with her pushing her away and than holding her close and to top it all off Nick is in the process of moving away and she doesn't think his feelings for her are strong enough to keep him in a house he hates.

Overall, it's a great story to get you in the Christmassy mood and appreciate your family and what you have. I loved the characters and the writing it's my first Jenny Hale book and it won't be my last. The first story is one of a Naval Captain who remembers a woman who nursed him when he fell ill. 10 years later he gets the letter he was waiting for, much of it water damaged, but the gist of the letter is that she says yes.  So he goes to find her and finds that things are more complicated than they seem.  There's a fair bit of miraclous happenings and literal deus ex going on in this but it's not a bad story overall

Her Christmas Temptation by Christine Merrill is an entertaining story of a rake who goes to break an engagement for his beloved cousin and finds that maybe his motives aren't so clear.  I really enjoyed this one.

Awakening his Sleeping Beauty by Janice Preston the Sleeping Beauty metaphor is stretched a little here but the story is good, an opressed heroine finding love and respect is always good.

Overall not bad and quite seasonally based, the last two are set during the 12 days of Christmas. Christmas Wishes is a short historical Christmas romance by Wendy Vella.  Don't let the size of the book fool you, Ms. Vella has packed each of these well-written pages with action, drama, sexy bits and humor.  Hero has taken orphans into her home.  Max is asked for financial help because she is struggling to keep household repairs done and food and clothes available for the children.  I loved every page of this book and look forward to reading more from Wendy Vella in the future.  Christmas Wishes is a complete book, not a cliff-hanger.