Log in with Facebook
or
Wrong email address or username
Sign up
Already on BookLikes? Log in!
Incorrect verification code
Please, check your email, the code to access your BookLikes blog was sent to you already.
Enter code:
« Back Send
back to top
Search tags: Darynda-Jones 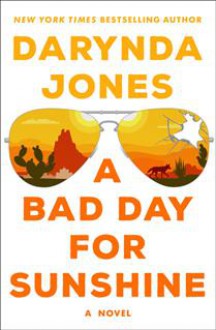 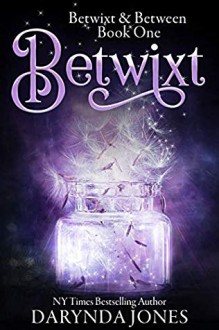 This is so much like the Charlie series. I enjoyed the snark and humor, but kept flashing back to previous books, the similarities are overwhelming. This is a fun read, but expected something more. Can not decide whether to go on to the next book.

I really enjoyed this book! I have been wanting to read Darynda Jones's work for a very long time but just haven't fit it into my reading schedule yet for one reason or another. As soon as I saw this book, I knew that this would be one that I would have to read. I really like the fact that this is the start of a brand new series and that is a very different premise than the books in her popular series. This story hooked me from the beginning and entertained me until the final page.

Sunshine Vicram is the new sheriff in town. She's not really sure how that happened since she didn't even know she was running but that is something that her parents will need to explain. She has moved back home with her daughter, Auri, and hopes to ease herself into her new position but that is not meant to be. Before she knows what is going on, she must lead a search to find a couple of missing teenagers and deal with a few other cases hitting her small town.

I found this to be a rather exciting story. There were several different mysteries that Sunshine had to deal with and I liked how she was able to juggle the workload. I really liked the characters and appreciated getting to know about their past slowly as the story progressed. I was delighted to not only follow Sunshine on her adventures but to also get the opportunity to see things from her daughter's point of view. I really liked that the characters in this story had a wonderful sense of humor. I thought that the added humor helped to offset some of the more serious moments.

I would definitely recommend this book to others. I found this to be a wonderful start to a very promising series. I fell in love with the characters and was captivated by the rather complex mystery. I look forward to reading future installments in this series.

I received a digital review copy of this book from Macmillan - St. Martin's Press via Edelweiss.

Initial Thoughts
I really enjoyed this one. I feel like I would have flown through this book if the world wasn't such a strange place right now. I found this book to be a great escape. I loved Sunshine, Auri, and the rest of the characters. I really liked the fact that there were several mysteries in this book happening at the same time. The story was able to keep me guessing and I appreciate the fact that there was a decent amount of humor sprinkled throughout. I am looking forward to reading more of this series in the future. 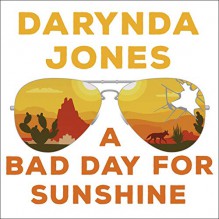 This was a great read for my fourth week in Lockdown when I needed a book to escape into that would make me smile, keep me engaged, give me a puzzle to solve and people to cheer for.

I pre-ordered "A Bad Day For Sunshine", even though I wasn't a fan of Darynda Jone's Charlie Davidson series because it left the supernatural stuff behind and didn't seem to be aimed mainly at the YA market.

I also liked the premise: Sunshine Vikram returns to her home town of Del Sol, that she left when she was seventeen, to take up the job of Sherrif, an office she was elected to in absentia via a mysterious means used by her parents. She brings with her her fourteen-year-old daughter, a dark personal history and a secret determination to hunt down the man whose actions changed her life.

This is a book that, to be enjoyed, has to be accepted on its own terms. You need to be ok with a plot with an improbable dependence on co-incidence and interlocking, very dramatic and long-held-secret past events in a decidedly odd small town in New Mexico and to be entertained by fast, witty banter, bizarre quotes at the beginning of each chapter (my favourite was 'Predictive text: our own worst enema'), quirky crimes and a lot of not-entirely-serious drooling over the (many, many,) well-put-together men Sunshine encounters. Most importantly, you need to like Sunshine and her daughter Ari.

Fortunately, this last is not difficult. I liked Sunshine and lot and Ari almost as much. Think 'The Gilmore Girls' and add a deeply traumatising past and a tendency for both mother and daughter to put themselves in danger when they think it's the right thing to do.

Women are at the heart of this story. Women who want a world that is populated by 'men who deserve them' rather than by assholes and predators who need to be guarded against.

The characters are strong, if not particularly original. The plot, which centres around the abduction of a teen girl, has quite a few surprising twists. The pace is fast, the violence is moderate, the sex is mostly PG and the humour... well, it worked for me. If I lived in a small town in New Mexico, I'd want Sunshine Vikram to by my Sherrif.

I had a great time with this book. It was a splendid distraction from the present unpleasantness and I'm now hooked on the series.

I strongly recommend the audiobook version of "A Bad Day For Sunshine" as Lorelei King's performance is pretty much perfect and swept me along.

This is a little stylised but it's smoothly done, the storytelling works and apart from the occasional (to me at least) over-long drooling over well put together men, it's working well. There's a worthwhile story and the groundwork for a distinctive series.