Log in with Facebook
or
Wrong email address or username
Sign up
Already on BookLikes? Log in!
Incorrect verification code
Please, check your email, the code to access your BookLikes blog was sent to you already.
Enter code:
« Back Send
back to top
Search tags: Elizabeth-Boyle 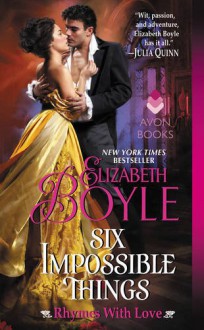 I feel like I've been complaining about this a lot lately, just my string of luck with picking stories I guess, but our hero and heroine had a childhood friendship, we get no scenes of it. Basically, she already has found him sexy and wanted him, while he is waking up to the fact that he, too, has always wanted her. I missed watching and experiencing the development of attraction. 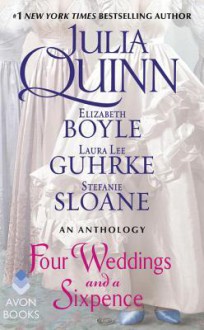 Four young girls, roommates at a boarding school, find an old sixpence in a mattress and decide it would be their lucky charm in finding suitable husbands when the time came...

Something New by Stephanie Sloane (❀❀❀)
Miss Anne Brabourne needs to find a husband and quickly, before she’s banished into the country. She also has a list of requirements and that list doesn’t include either love or passion thanks to the destruction, caused by heightened emotions, she’d witnessed as a child. Anne also gains a strange ally in her husband-seeking quest; Rhys Alexander Hamilton, Duke of Dorset. He’s determined to help her, but he has his own reasons.

This was a cute story. Maybe a tad too short, since both characterization and the plot itself suffered a bit—everything happened rather quickly, feeling a bit rushed. But I liked both main protagonists and especially their matchmaking aunts.


Something Borrowed by Elizabeth Boyle (❀❀❀❀)
Miss Cordelia Padley has invented a fake betrothed to curb her aunt’s enthusiasm of thrusting vicars upon her. But now she’s invited to her friend’s wedding and she’s supposed to bring her man along. The only one she could turn to is the famous Captain Kipp Talcott, her childhood friend. But as she pays him a visit, she discovers Kipp isn’t her Kipp anymore, but Winston Christopher Talcott, the Earl of Thornton. Still, she asks him to pretend to be her betrothed and he agrees, even though he was about to really get betrothed himself.

A sweet story of long-lost childhood friends finding each other again, trying to navigate between old and new dreams and real adult responsibilities, but in the end only one thing prevails—the heart.
I liked the contrast between the slightly flighty heroine and the stuffy hero, they provided a nice balance, complimenting each other rather splendidly. The story moved well, and though the love-story might appear rushed, the fact they were childhood friends compensated for the lack of space and time dedicated to the deeper development of their romance.


Something Blue by Laura Lee Guhrke (❀❀)
Lady Elinor Daventry is determined to save her father no matter the cost. Even marrying a man she doesn’t love. Anything is preferable to her father standing trial for things he didn’t commit. That’s why, six months before, she broke off her engagement to Lawrence Blackthorne, the man who believes all the nasty rumors about her father, determined to ruin him.
Ellie knows the sixpence is her ticket to marriage to the son of the duke, who might sway the peers to believe her father, but Lawrence Blackthorne has other ideas…And steals the coin.

This would’ve been a lovely second-chances story if it weren’t for the heroine and her determination to believe her father no matter what. Even when she had proof, she was still stubbornly in denial. I didn’t like how she treated the hero when he was doing his duty, the man that gave her up in order to seek justice for thousands of men.
I felt she wasn’t really worthy of everything Lawrence did to get her back, and somehow I didn’t really believe her feelings in the end, either.


...and a Sixpence in Her Shoe by Julia Quinn (❀❀❀❀)
Miss Beatrice Mary Heywood is the most pragmatic of the four friends. And the only reason she’s wearing the sixpence in her shoe is to keep her promise to her friends that she’d do so. And then she meets Lord Frederick Grey-Osbourne and all her dreams suddenly come true.

Granted, the romance seemed a bit rushed, but we’re talking about a short story after all. I liked both protagonists, especially Bea, who looked beyond appearances and her enthusiasm was rather contagious. Frederick was a bit bland, at least compared to Bea, and I absolutely adored aunt Calpurnia in all her matchmaking glory. 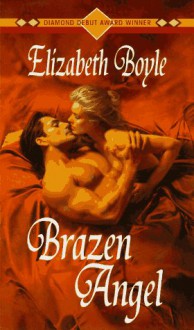 Brazen Angel is an awesome historical romance by Elizabeth Boyle.  Ms. Boyle has provided us with a well-written book.  The characters are amazing.  Giles is on the hunt for London's notorious Brazen Angel, not aware that she's the same woman he's soon to wed.  Sophia plays the part of the Brazen Angel to steal from her targets.  Giles and Sophia's story is packed with drama, humor, sizzle, action and suspense.  I enjoyed reading Brazen Angel and look forward to reading more from Elizabeth Boyle soon.  Brazen Angel is book 1 of the Brazen Series but can be read as a standalone.  This is a complete book, not a cliff-hanger.

Jane Austen would be proud. Her brand of humor, heart and pomp was executed to create a flawless celebration of the majesty that is historical romance. I went into this anthology as a fan of Julia Quinn and left it having discovered three new kindred spirits in my love of regency. Each author add her voice to a collection of stories that blended seamlessly to create one terrific read. Whimsy, sentiment and love collide in this ode to romance.

I adore the "guy has to get over his idiocy and deal with the fact that he's in love with his best friend's little sister" trope. Combine it with a madcap HR and I'm in heaven. I was in a serious reading slump before I picked up If Wishes Were Earls, like anxiety and deep conviction that I'd never find another book to love were involved, so what a relief that this crossed my path.

So yay for Harry and Roxley! I had no problem with the fact that she chases him, especially since their relationship starts with her punching him in the face as a child. This chick knows what and who she wants and also knows that he loves her too and needs to get over himself. Was it a bit unbelievable that the book starts by mentioning he ruined her 8 months ago and yet, although honourable hasn't married her? Sure. Did I care? Not really. I found the entire story a delight and pretty much grinned my way through it. More like this please.