Log in with Facebook
or
Wrong email address or username
Sign up
Already on BookLikes? Log in!
Incorrect verification code
Please, check your email, the code to access your BookLikes blog was sent to you already.
Enter code:
« Back Send
back to top
Search tags: Howls-Moving-Castle 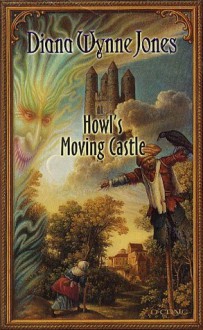 I was first introduced to this tale in movie form, however, to my great pleasure I stumbled across it at the book store on April Fool's day. To say I had to pinch myself to make sure I was not being tricked is an understatement. I whisked it to the front desk to purchase immediately and could not put it down! In this book, things like witches, wizards, kings, spells, seven-league boots and fire demons were everyday normal things.  The Hatter sisters, Sophie, Lettie, and Martha knew the warnings and stories. So, when a big black castle showed up on the horizon that moved warnings were whispered about in the village but life remained the same that is until the Witch of the Waste paid Sophie Hatter a visit and cursed her! From that moment on Sophie had to set out to find someone to break the curse and return her to her normal 17 year old self. Her mission is not as easy as it seems though as she finds the Wizard Howl and gets tangled up in all sorts of trouble.

This book would be another good book to do an in-depth class study on and breaking it down into chapters for character analysis, plot, theme, problem/solution studies and much more. I foresee the students being activity engaged in trying to figure out the poems and untwisting the plot.

This post can also be found on my blog MissKatiEllen.

I didn’t get a chance to talk more about Vampire Academy as I had so much to cram in. Although I struggled with Rose to begin with I love how she developed and matured, I especially loved that Mead separated Lissa and Rose. It completely changed the game. Rose had to deal with the choices she made, deciding to leave her life behind to track down the man she loved without so much as a explanation could have broken the girls friendship. And choosing to leave meant she could not longer be there to protect Lissa, but being bonded through spirit Rose had to share every moment she couldn’t be there for her. And for Lissa it meant putting her trust in someone who didn’t share a bond, trusting that Rose would come back. Not to mention dealing with the responsibilities and pressures that come with living at Court. 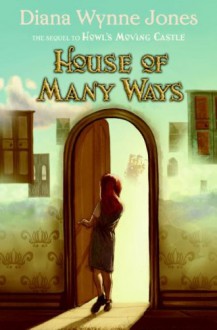 Title: House of Many Ways

Summary: (from Goodreads:) When Charmain Baker agreed to look after her great-uncle's house, she thought she was getting blissful, parent-free time to read. She didn't realize that the house bent space and time, and she did not expect to become responsible for an extremely magical stray dog and a muddled young apprentice wizard.

Now, somehow, she's been targeted by a terrifying creature called a lubbock, too, and become central to the king's urgent search for the fabled Elfgift that will save the country. the king is so desperate to find the Elfgift, he's called in an intimidating sorceress named Sophie to help. And where Sophie is, the great Wizard Howl and fire demon Calcifer won't be far behind.

How did respectable Charmain end up in such a mess, and how will she get herself out of it?

Review: I love this series so very much! I have been taken a very long time to finish it, because now I am sad: I WANT MORE HOWL'S MOVING CASTLE!!!!!! *many, many tears and lying on the floor, hitting it with fists and feet* And I know I will never get it, because dear Mrs Jones can no longer be brilliant - God rest her soul!

I enjoyed the book. Like Castle in the Air Howl, Calcifer and Sophie are not the main characters in this book, but is minor characters. I wish so much Jones had wrote another book about them!!

House of Many Ways is not Howl's Moving Castle and it is probably impossible to write another book as brilliant as the first one. House of Many Ways is, although, very joyfully. There is more normal days (as normal as it can get in a wizard's house) described in this book, rather than in Castle in the Air (the second book), which was more out-on-an-adventure-book. Of course there is adventure in it, but because of this - and other reasons - it reminded me a bit more of the first book, than the second book had - and that pleased me a great deal.

Charmain, the heroine, is a character I really enjoyed. She is useless in a household, she is a bit rude, she is a bookworm (always a good sign) and she is ginger(!!!!). Waif (the dog) is a good and sweet helper, but Peter (I guess he is the male main character) is a bit... Nah. He kind of disappointed me. I have always thought Diana Wynne Jones was good at creating creative, different and original characters, but Peter was really just... plain. I mean - compared to the gallery of the characters in Howl's Moving Castle ... I can tell with those characters what kind of person they are and in a lot of details, too. Peter... I actually can't say much, other than his magic skills is terrible. It disappoints me. Not good enough!

No big plot twists this time, which surprised me. Once again, not as good as the first book.

My big problem with House of Many Ways and for that sake also Castle in the Air is actually that I would love them, if I didn't every single time expected Howl to come any time and steal all the spotlight, and be let off disappointed. But... Howl was rather hilarious in this book, once again! He and Sophie is really the perfect match! Fortunately, even though they only are minor characters in the book, they are very less minor here than in Castle in the Air.

Looking at the book alone I enjoy many of the things I also enjoyed with the others - the language, the writing style, setting etc. etc. AND! not to forget: Diana Wynne Jones' wittiness! Which is the biggest reason I absolutely adore her and this series.

Summary: (from Goodreads:) Sophie has the great misfortune of being the eldest of three daughters, destined to fail miserably should she ever leave home to seek her fate. But when she unwittingly attracts the ire of the Witch of the Waste, Sophie finds herself under a horrid spell that transforms her into an old lady. Her only chance at breaking it lies in the ever-moving castle in the hills: the Wizard Howl's castle.

To untangle the enchantment, Sophie must handle the heartless Howl, strike a bargain with a fire demon, and meet the Witch of the Waste head-on. Along the way, she discovers that there's far more to Howl—and herself—than first meets the eye.

Review: I love this book! I reread it once every year, and I never grow tired of it! I will recommend it to EVERYONE, who is missing a real magical fantasy that have a once-upon-a-time-atmosphere. Because this book is just magical - no more words are needed, but I will do so anyway.

The book takes place in the land of Ingary, which is of course an imaginary country in a time where wizardry is a profession and technology is not developed the way we know it. E.g. there is no cars, only carriages. Or in Howl's case - a moving castle.

It is a classical fantasy (although it is written in 1986) and already in the first line, you know it. "In the land of Ingary, where such things as seven-league boots and cloaks of invisibility really exist, it is quite a misfortune to be born the eldest of three."

The characters are wonderful! All of them. Sophie is the main character, and it is her point of view we see the events from. She is sarcastic, witty and lovely. There is a great character change for Sophie, from being a "grey littler mouse" to an independent, bold grown up woman. Or a bully, as Michael, Calcifer and Howl describes her. I would say though, they use the term 'bully' a bit lightheartedly.

Calcifer is Grumpy-funny. He is impolite, spoil, egocentric, but you cannot not love him and laugh with him. He is by the way a fire demon and looks very like as in the book cover (the cover artist has done a good job).

Michael is Howl's apprentice and is a typical teenager with a bit of lack of a spine.

Then there is Howl. Howl is a handsome, vain, arrogant and a bit childish character. Just like Calcifer, he has not many good characteristics, but it is impossible not to love him. He is really funny when he tries to get sympathy or be taken serious (which no one does). He is a bit of a diva in the fun way. I don't know who I love the most: Sophie, Calcifer or Howl. All funny, but in very different way.

When I say funny, I do not mean haha-funny and slamming my hand on my lap. It is... British-funny - quirky. Dry sarcastic humor is my favorite kind. But at the same time it is a children's (8-12 I would guess) book, so the humor is of course not only dry - which is pretty grown up humor - but also pointed toward the younger reader.

Actually I think that is the great thing about this book. No matter what your age is, there is something for everyone.

And the language is in my opinion perfect. It is delicate, a bit old-fashioned but at the same time simple, but not at all plain.

I think it is a combination of the characters, the humor and the language that make me go back and reread the book, and every time I read it I enjoy it as much as I enjoy a hug. It is a cozy book. I think it will always be my all-time favorite.