Log in with Facebook
or
Wrong email address or username
Sign up
Already on BookLikes? Log in!
Incorrect verification code
Please, check your email, the code to access your BookLikes blog was sent to you already.
Enter code:
« Back Send
back to top
Search tags: Jayne-Ann-Krentz-Amanda-Quick-Jayne-Castle 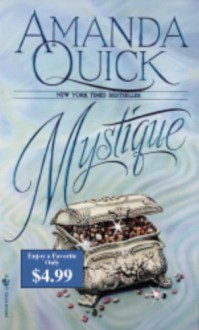 Hugh the Relentless wants to become Hugh of Scarcliffe. To accomplish that, he needs to appease his superstitious villages by finding a green crystal that's been recently stolen from the Scarcliffe convent.

The green crystal was briefly in possession of Lady Alice, a sharp-tongued beauty that's determined to strike a bargain with Hugh. She'll help him locate the stone, if he helps her and her brother leave their uncle's manor.


This was almost an exact copy of Desire with the long-suffering, knightly hero becoming saddled with an opinionated, rather spoiled, and entitled heroine with a sharp tongue, reckless impulses, and (at least from what I've seen) not much wit.

The suspense was the saving grace of this story with motives and suspects galore, and the mystery involving past sins and the Stones of Scarcliffe was nicely intriguing. Unfortunately, it couldn't compensate for the lack in all other "departments". 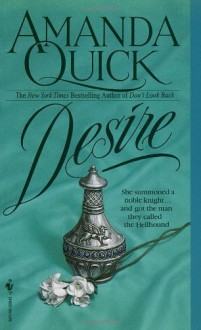 Clare, lady of the Isle of Desire, has no other choice but wed. What little choice she does have, will be spent on choosing the right husband, following a specific "recipe". All she needs are suitable candidates; they must not be big, they must be kind and have a pleasant disposition, and they must read.

Her liege lord sends her only two possible candidates. Sir Nicholas is out of the question, since he's an idiot, while Sir Gareth, the knight they call the Hellhound of Wyckmere, will not do either. He's huge, too serious and appears emotionless...But at least he can read.

I liked Gareth. He was the incarnation of a still water running deep. He was honorable, protective, smart and cunning...And unfortunately saddled with an idiot for heroine.
I couldn't stand Clare. For someone who prided herself on her intelligence, she sure could act stupid and shrewish. I'm sure she was supposed to be a feminist, but her "smart, strong willed" tantrums landed her in the entitled and opinionated bitch territory. She was impulsive, she never thought before she spoke, and her stereotypical view of knights (even the one who has sworn to protect her), coupled with her idiotic fantasy of the "dream man" got old really fast.

The resulting romance between the poor guy and the somewhat TSTL shrew made me wince, the "suspense" was predictable (you could see the villain and his "accomplice" from a mile away) and too short-lived...The majority of the story was spent on the two protagonists getting to know each other and Clare being Clare. With a different heroine, it might've been entertaining; with this one, it was just painful. 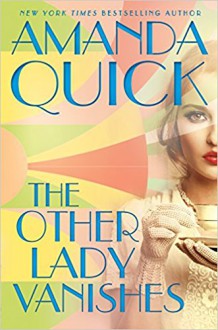 Adelaide Blake escapes from her involuntary residence at a private asylum for the insane and seeks refuge in the small Californian town of Burning Cove. Working as a tearoom waitress, she does her best in not getting noticed, but she still manages to get the attention of Jake Truett, a recently widowed businessman recuperating his shattered nerves in Burning Cove.

Adelaide soon discovers Jake's nerves are as steely as hers, when he rushes to her rescue brandishing a gun, and when psychic to the stars Madam Zolanda plunges to her death, unwittingly fulfilling her own prediction of someone dying a bloody death, Jake's nerves of steel come in handy as it soon becomes apparent Zolanda and Adelaide's cases are connected.


Unlike its predecessor, the suspense in this story actually worked well. The entire plot was intriguing and rife with mystery and dangers, and what red herrings there might've been turned out to be genuine clues and connections.
I liked the mystery of it, I liked the guessing game I went through to discover who the villain is, what the possible connections were, who was pulling the strings...And I especially liked the final little twist to the well-developed suspense arc.

It's the rest of the story that lowered the rating. While the time period didn't bother me in this one, and the characters were rather well-drawn (the heroine wasn't off-putting in the least), I missed the romance element. It was there, in the story, but what we got left me cold.
I certainly wasn't convincing and came across as rushed and not as polished as the rest of the story was. Still, in the end, I sensed the seed of it, but that was all it was; the big revelation of feelings jumped the shark.

Still, the suspense saved the day. 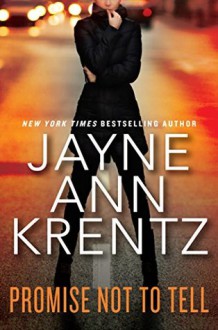 Hannah Brewster, an artist and former member of the Quinton Zane cult, throws herself off a cliff after destroying her latest painting. But before burning down her cabin and jumping to her death, she takes a photo of her last creation and mails it to one of the survivors of the "end" of the Zane cult, art gallery owner, Virginia Troy.

Virginia knows there's more to Hannah's death than the suicide everybody else is buying, so she enlists the help of Anson Salinas, the man who saved her and seven other children from the fire Zane had started all those years ago. Salinas has recently opened an investigative agency, along his three foster sons, all three saved from the same fire, and Cabot Sutter immediately recognizes Virginia, and agrees to help in her investigation.

Cabot and Virginia quickly realize they're on the right path, as bodies start piling up, but little do they suspect their poking into the past will soon make a demon from their joint, fiery past rear his dark head.

It was still as complicated and convoluted as its predecessor, but the mystery was much tighter and intriguing, keeping me entertained and guessing despite all the villains, motives, motivations, and sub-plots.

This one also took its sweet time before it started going, but the pace wasn't as slow to begin with, and once the mystery kicked in and later started to unravel, the pace was suitably heightened.
Unfortunately, the many slow spots in between, exposition scenes, inner monologues, anxiety attacks etc., made the story flow rather "hiccup-y"; the constant start-stop-start-stop of the story jarring.

The characters had also much to be desired. Bland, template-y, carbon copies of previous character by the same author, and despite Ms Krentz obvious attempts at adding layers and depths, rather one-dimensional and dull.
The hero didn't appear to have much of a personality, while the heroine "quirks" were rather incongruous with what she's been through (how can someone who survived a fire when she was nine end up having intimacy issues is still beyond me). Neither hero nor heroine had any really appealing character traits to get them to stay in the reader's memory beyond the end of the book, and their romance was a real stretch to believe.

Sometimes a story it so intriguing, so realistic, it makes the reader think it could easily happen in real life, then there are those that by character action and/or plot elements and story scream "fiction" and this one was one of the latter. Everything was just a tad too bland or that little bit over the top (the whole hiding of the money from the monster, for example) to make it unrealistic and implausible, straight-up fiction.

Still, the mystery was intriguing, but the story could've used some heavy editing to get rid of some unnecessary scenes, especially those after the end, where the scene with the reveal about the major player from the past would've sufficed.

Seventeen years ago, Irene Stenson found her parents corpses in their kitchen. The crime, ruled murder-suicide, has scarred her for life, since she couldn’t come to grips with the fact her father could’ve killed her mother, and so unable to put it all behind.

Now, Irene, an investigative reported with a small newspaper, receives an e-mail from her once-best friend, the one who was with her on the night that had changed her life, inviting her back into her hometown with promises of explanations about the past.

But instead of explanations, Irene finds more questions, when she finds her friend dead of a supposed overdose, while the very next day her friend’s house burns down. Something’s not right, but the local police denies any suspicions, yet Irene isn’t alone in her little investigation. Luke Danner, the owner of the resort Irene’s staying in, feels not all dots are connected, and knows Irene is right in the middle of the emerging picture.


Oh, wow. This is how you write romantic suspense, and this is what I’ve been missing lately in Ms Krentz’s novels.

Great characters, both scarred, both with issues not many people can understand or relate to, but they’ve each managed to find someone who does.
Both Irene and Luke (although we can only imagine what he went through) went through horrible experiences, and yes, those experiences have marked them, but didn’t put them out of commission, they’ve come back swinging and stronger for it.
And in the end, against all odds, both their diagnoses (hers confirmed, his not so much), despite his meddling family (which was the “weakest” part of the story, if you ask me, since it didn’t really “connect” with the overall plot), despite everything they found each other, that someone who can understand, who can relate, and who can help battle the demons when they struck.
Their chemistry was sizzling, and almost palpable, their romance rather believable, if a bit rushed, their communication both serious and funny...Boy, howdy, I loved them to bits.

But romance, no matter how strong the characters are, isn’t enough to make a romantic suspense novel. You also need suspense, and this one had it in spades.
Gripping, intense, edge-of-your-seat, keeping-you-guessing-until-the-last-page suspense. Nicely paced, well-written, well-plotted out, with many red-herrings along the way, and when the big reveal came (well, both of them), I just couldn’t. I absolutely didn’t see it coming, but in the end, the villain, the motive, everything made perfect sense.
Wow.

This one truly had it all; wonderful, layered characters, great chemistry and romance, a good supporting cast, gripping suspense with loads of misdirection, and the main villain you won’t see coming.