Log in with Facebook
or
Wrong email address or username
Sign up
Already on BookLikes? Log in!
Incorrect verification code
Please, check your email, the code to access your BookLikes blog was sent to you already.
Enter code:
« Back Send
back to top
Search tags: Kade-Boehme Raised in near seclusion by an agoraphobic mother, Davy Cooper’s social skills are almost nonexistent. Now that his mother has died, he needs to make friends for the first time in his life. He catches Gavin Walker’s eye, but the sexy, confident, bad boy hipster intimidates shy Davy so much that he throws away Gavin’s number every time he offers it.

When Gavin defends Davy from a rude guy, Davy begins to warm to him. However, with his limited experience, he thinks he and Gavin are too different, and anything more than a casual acquaintance will end in complete disaster.

I picked up this romance because I love a socially awkward lead. Davy is that but mostly he is just reserved and shy.

It was a pleasure watching Gavin and Davy fall in love. We gets a lot of couple time and the cast is pretty good. This is very much a New Adult story as both our heroes come to terms with who their parents were and how it impacted them.

There are some good turns in this plot but in could have been a richer book in terms of character development with Gavin's art and some over simplifying of issues with the parents.

But I enjoyed it and will happily read other books by this author.
Like Reblog Comment
show activity (+) Riley's had the life that no child deserves...kidnapped at an early age and held hostage for 4 years, rejected by his parents when he's finally free of his kidnappers, he spends the rest of his childhood going back and forth between foster homes and institutions finally ending up in Hartfield as a lifer.

Hunter finds himself in Hartfield after spinning out of control leading to what Hunter claims was an accidental overdose. While his brother calls an ambulance, his sister claims it was attempted suicide leading to Hunter being admitted to Hartfield where he and Riley meet and quickly drawn to each other.

Two men both damaged, emotionally fragile, grieving loss in their lives. It's a bad situation to start a relationship in and as Hunter and Riley become closer and get to know each other, they also begin to realize things about themselves as well. It's the realization that in order to love someone else you have to care about yourself that forces both men to look at their lives with honesty and come to the realization that need to commit to themselves and fix their own lives before they can truly commit to a relationship.

There was a lot about this story that I enjoyed. I loved Hunter. Sure he was broken and emotionally fragile, but what he wasn't was self-centered. In spite of everything going on inside of him. He wasn't oblivious to what was going on with others and I really loved that in the end Hunter had the strength to do what he knew he needed to do to get himself to a better place even if it meant keeping distance between himself and the man he was falling in love with.

And Riley...he's probably one of the most heartbreaking characters I've encountered in a long time. I loved the way Riley was presented and that in spite of all he'd endured while he might have lost his way in the end he still found the strength start living his life and taking care of himself so that he could have a life...a good life.

And then there's Riley and Hunter together. They were cautious, sweet and so fragile even as a couple. Sometimes loving someone is about putting yourself first and making the hard decisions because you know it's what's right for both of you.

There were a lot of secondary characters in this story that I really liked as well...Hunter's brother, Bubba (Shane) another person that Riley and Hunter met at Hartfield. The nurses and doctors throughout this story. While they weren't all wonderful and some were definitely better professionals than others...that's how it is in the real world too and I liked that for me it added a layer of realism to the story.

This wasn't a happy, cheerful story...it wasn't a story filled with fun and fluff but it was a story that had hope and possibility and in the end there was love and all that it can offer when it's good and right.

This was all given depth and made even more enjoyable for me through by the narration of Michael Ferraiuolo. This is not the first audio book narrated by Michael Ferraiuolo that I've enjoyed and I have to admit that Hunter's voice was very reminiscent of one of my favorite audio characters from The Five Bouroughs' yeah...that's right we're talking about Oli here...I loved Oli's voice and Hunter's voice is so like Oli's...and this made me a happy girl.

Ferry-Tale is a very sweet romance between two regular, somewhat awkward yet totally endearing guys, and I found myself smiling through most of it.

The story is told from the POV of Adam, a thirty year old copywriter living on Staten Island with his pug. Adam and his anxieties were very relatable for me and I just adored him from the start. Shy, introverted, a bit insecure and not quick to trust, Adam tries to keep his crush on Timmy compartmentalized so he doesn’t jeopardize their friendship since he’s also not clear on Timmy’s sexuality. He’s got a bit of an “Ice Queen” persona until you get to know him, but he’s had a tough time in the past. He has dealt with it and is in a good place, but he isn’t just going to let his guard down for anybody.

Timmy took me just a little longer to warm up to. You’re not really sure at the start what his situation is and what his intentions are when it comes to Adam. Is he just a really nice guy and trying to be a good friend, is he looking to experiment, is he hiding something or is he really into Adam, but not quite sure what to do?

Initially there are some misconceptions to work through and they have a difficult time communicating about anything that might have to do with feelings, but once they man up and talk their feelings out, the unromantic pair get pretty romantic. There’s so much heart in this book; in Adam, who I just wanted to give a big old hug. He doesn’t know what Timmy could possibly see in him and he couldn’t see through the friendly gestures that showed Timmy crushing on him just as much in return.

When I said earlier that these are just two regular guys I meant it. There is not an ab muscle in sight, they have boring jobs and we see their day to day existence. They deal with family, friends and exes and there is nothing crazy going on – unless you count semi-public sex on the Staten Island Ferry to be crazy, but I’m sure those bathrooms have seen worse! There are ups and downs as Timmy slowly cracks the through Adam’s defensive walls, and Adam tries to gather the strength to lay it all on the line for the man he’s quickly falling for. There is no major angst, but there are some hurt feelings along the way that need to be fixed before on both ends before they can even think of moving forward.

This is the first novella in the new Landmarks series of books by Kade Boehme and Felice Stevens and you don’t have to be a New Yorker to enjoy it. The story is a standalone and has a happy ending with a nod to a classic fairytale moment, but I’m hoping future books will give us an update on Timmy and Adam. I needed a pick-me-up story after the series I'm reading at the moment.

And now I'm a blubbering mess..

#reallyshouldpayattentiontoblurb
Amazingly written about a Country boy meeting his love of his life, Soldier Boy. It had me crying already at the first 2 pages... 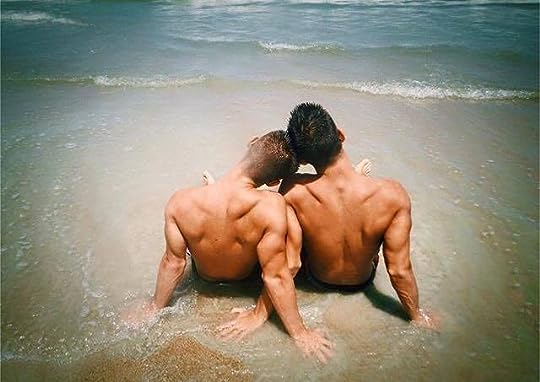 "This - this right here - this is what I've been fighting for all these years.
The ability to just love someone, and no matter how close-minded some people are, to have the right to it."