Log in with Facebook
or
Wrong email address or username
Sign up
Already on BookLikes? Log in!
Incorrect verification code
Please, check your email, the code to access your BookLikes blog was sent to you already.
Enter code:
« Back Send
back to top
Search tags: Nimona 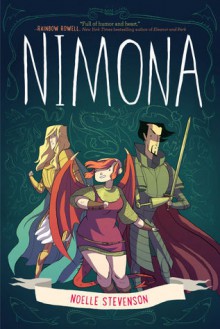 Summary: Nemeses! Dragons! Science! Symbolism! All these and more await in this brilliantly subversive, sharply irreverent epic from Noelle Stevenson. Featuring an exclusive epilogue not seen in the web comic, along with bonus conceptual sketches and revised pages throughout, this gorgeous full-color graphic novel is perfect for the legions of fans of the web comic and is sure to win Noelle many new ones.

Nimona is an impulsive young shapeshifter with a knack for villainy. Lord Ballister Blackheart is a villain with a vendetta. As sidekick and supervillain, Nimona and Lord Blackheart are about to wreak some serious havoc. Their mission: prove to the kingdom that Sir Ambrosius Goldenloin and his buddies at the Institution of Law Enforcement and Heroics aren't the heroes everyone thinks they are.

But as small acts of mischief escalate into a vicious battle, Lord Blackheart realizes that Nimona's powers are as murky and mysterious as her past. And her unpredictable wild side might be more dangerous than he is willing to admit.

My review: I really enjoyed this A LOT!!!

When I started the book, I was in for a fun adventure of a small sunshine who starts to work with a big not so soft dude, who is totally soft for her. THE JOY I FELT. And I loved them working together, I loved their banter, I loved the relationship they build. I started to have all the "found family" feels.

BUT OH BOY. This book went into a completely different direction than I thought it would. And I got so many different feels. THE HEARTBREAK, THE HURT, THE "OH SHIT, WHAT'S HAPPENING, I CAN'T DEAL WITH THIS" feels. It was A LOT.

I loved the story, I LOVED the characters. I LOVED THE ARTWORK. Holy shit, this book is freaking STUNNING. 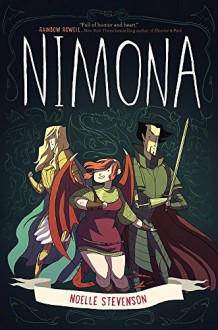 Lord Ballister Blackheart is a villain and Nimona want to be his side-kick. Being a shape-shiftier would be helpful.

They have fun together and plotting plan to making chaos.

Sir Ambrosius Goldenloin was supposed to be the good guy, working for the institute. He was a friend of Ballister before he fired a weapon and wounding him and make him lost his right arm.

The story is rich and unexpected. The graphic is wonderful and it is such fine work that I read the whole thing in one setting. I want more.

Whose chubby and kicks ass? Nimona!

Who can shape shift into awesome things? Nimona!

This comic is a look at what good and evil actually are. This is something that many comics do not do well but also on why certain plots are needed.

I enjoyed the fact that the scientist who invents an important device is a black woman.

The story is sad at points, but it does showcase important points about friendship and love.
Like Reblog Comment
show activity (+)

I picked up this book because GoodReads kept recommending it to me and I saw it at my library. I adored this story by the time I finished reading the last page. Lord Blackheart and Knight Goldenloin (hehehehe) had a wonderful romance journey. I will admit to loving Blackheart right from the beginning, not so Nimona - it took a while for me to warm up to her, but by the end I wanted her to burn EVERYTHING down. This takes the basic fairy tale structure and subverts it in small, modern ways that make the reading fun. 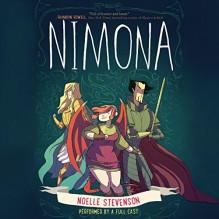 Nimona started off as a free fantasy webcomic and has since been published in graphic novel form (only the first three chapters of the webcomic are still available for free). I read it back when it was a webcomic and remembered enjoying it. I was excited when I heard about the audiobook, but also wary. I mean, it's a graphic novel. How do you turn a graphic novel into an even halfway decent audiobook?

In the case of Nimona, it was turned into something like a radio play, complete with sound effects, a full cast, and a narrator filling in whatever the sound effects and dialogue couldn't get across. For the most part, I thought it was reasonably successful, although I still missed the artwork.

Let me back up a bit. Nimona stars Lord Ballister Blackheart, a villain who wants to cause trouble for the Institution of Law Enforcement and Heroics but who doesn't actually want to hurt anyone, and Nimona, his new sidekick. Nimona is a shapeshifter who thinks being a villain sounds cool, and she's overenthusiastic about her new job. She has a tendency to kill people if Ballister doesn't watch her and rein her in. Ballister's nemesis is Sir Ambrosius Goldenloin, the man who blew off his right arm.

When Ballister learns that the Institution of Law Enforcement and Heroics is involved in a project that may be poisoning the country's crops, he decides to intervene. The situation is complicated by Nimona's secrets and Ballister and Goldenloin's painful history

(they used to be friends, and it's strongly hinted that they were once lovers).

If the names didn't make it clear, there's a good bit of humor in this. I enjoyed Ballister's enthusiasm for the Science Fair, Dr. Blitzmeyer's complete obliviousness to anything that wasn't her area of research, and anything that poked fun at Goldenloin. The story did take a turn for the serious, though, when the full story of Nimona's past was revealed.

For the most part, the voice acting was pretty good. I was iffy about the casting decision for Goldenloin, but I loved the rest of the main cast. The attempt to have sound effects and narration fill in for the original story's artwork mostly worked, although I'm guessing that my past familiarity with the webcomic probably helped. That said, there were a few times when even I had a little trouble following what was going on, usually when Nimona was doing some of her more rapid-fire transformations.

Story-wise, the pacing was a bit weird. As much as I loved Ballister's reaction to the Science Fair, for example, that part came at an odd time in the story. Also, the ending was extremely unsatisfying. I can't remember if I had the same issue with the webcomic, but I recall a few extra illustrations that at least gave the illusion of more closure. And did the webcomic let readers at least know more about

Goldenloin's ultimate fate? Unless I missed it, the audiobook didn't - the last thing that was said about him was that he might not ever wake up again.

All in all, this was better than I expected, but I'd probably still advise newbies to the story to start with the graphic novel and listen to the audiobook only if they love the original work and want more.

This is my 3-star "I don't even know" rating. I'd probably have rated it higher if it hadn't been for the ending.