Log in with Facebook
or
Wrong email address or username
Sign up
Already on BookLikes? Log in!
Incorrect verification code
Please, check your email, the code to access your BookLikes blog was sent to you already.
Enter code:
« Back Send
back to top
Search tags: SP-15-Favorites-2013 Since I practically didn't remember anything about it any more, this was almost like reading a new book :)

I'm taking half a star *snort* because <b>Hell</b>, this was one never stopping roller-coaster!

Also, author Seanan Mcguire could do so much more with the romance between Toby and Tybalt: so frustrating!
You know what I am talking about it ;)
And now I'm left feeling a little like a perv. *cough*

Okay, now on to reading "The Winter Long".

As readers, no matter what our taste in books might be, there will always be some times when one will be faced with:

A- Boring plot or simply a non-existent one;
( I could come out with a few examples of those)

B-  Boring characters (which you secretly wish would just fall down of a cliff).

C- Love triangles/rectangles or any other kind of other geometric figure created to disguise the lack of an actual <i>you know<b>plot</b></i>.

D-  Writing that leaves you with a headache... since you're to chicken to gouge your eyes out!

Right?
You guys know what I am talking about.

But moving on...so after a long, <b>LONG year</b> of waiting for this book to be released, I can definitely and honestly say...
...THAT THIS WAS NOT THE CASE, you guys!!

NO, this was bloody brilliant!!!

Honestly this is one of those cases where I get all: OH, THIS WAS SO GOOD!! ("fangirling" while simultaneously caps-lock(ing) A LOT!)
Yes, I have a big stupid smile on my face...and I'm trying not to resort to a vast number of gifs!!

I don't know how many of you have already started this series (on account of my crystal ball lack of batteries..and then the oracles are still on vacations...probably in Algarve!), but if you haven't, and if you like amazing world building and characters that just feel real enough....to hug...and shout at (heroes make you want to do that...trust me in that), you should definitely give this series a try!

In this story, Toby once again is left in the position of having to go against the Queen of Mists...you know, the one that hates her guts?
You can guess how that's going to work out, right?

But unlike what happened in the first books, Toby has grown up, and she knows when she has to ask for help.
And there's a lot to give, if she's willing to ask.

So once again, October and her merry gang will have to face an almost impossible situation, with danger and failure lurking at each corner. And as the story moves forward, the danger and tension just keeps building.
Then towards the end there was a fighting scene that I think I will never forget:
It involved a kick ass mermaid!! First time that I ever saw (read) a mermaid go ninja on the bad guys!

Then there's her romance with Tybalt. Well, what can I say...
Long Live the King of Cats!
They're so sweet..and cute! :D

It's so good to read a urban fantasy novel with dashes of romance, in which the male character isn't an ass!
(honestly this should be a rule in our days..)
So go, and follow Oberon's edict:
Go read this book asap!
Me?
I'll be counting the days until the next one is released! “Fascinating” is the best word that that I come up with. For a second adjective I would choose “original.” I really enjoyed this mystery and have already bought the second in the series.

Where to start? This book worked for me on so many levels.

Set in the 70’s (post-Vietnam) in communist Laos our protagonist is a coroner. Mainly he pronounces deaths as “accidental” for the authorities who are philosophically and politically opposed to any death being classified as a murder---for murder as we all know, is a Western phenomenon, born of Western decadence---can’t happen here, right? Add to this the fact that Laos simply doesn’t have the resources to actually support a CSI practitioner and you have a very interesting situation when bodies start showing up with signs of homicide and torture, especially when the coroner doesn’t care if his findings ruffle feathers. Our hero has to borrow any chemicals he needs from the hospital and corpses are kept fresh, sort of, with ice, and getting tests done is next to impossible, but he is determined and I found him to be heroic while at the same time quite realistic. I must add however, that he has a little help. The dead will communicate, in a variety of ways, to point him in the right direction in his investigations.

And it was a fantastic mystery. Several, actually----we are treated to several complete cases in this one novel, ranging from the simple to complex political intrigue. Add to this the most interesting cast of characters that I have come across in quite some time and a narrative voice that brings these characters alive in full compassion and humor. I found myself laughing out loud several times at the irony and truth of the circumstances as I was enjoying a look through a window into a fascinating world and culture. Sort of like a Kafka novel with a real hero if that makes sense.

In short, loved it. The next one is already on the TBR pile. Oh boy, I can tell that I am going to read every one of this series. Starts out dark and somehow gets darker and even more compelling.  Not only are we treated to two separate mysteries in this first installment, I was fascinated by all extras----little vignettes that are fleshed out enough and so well done that they stand as short stories included in the overall work.  Some may have found this distracting---I considered it a bonus.

Mr. Connolly can sure write.  Take the noir and darkness of Elroy and Lehane and add a supernatural twist and you have an original series by a singular voice. 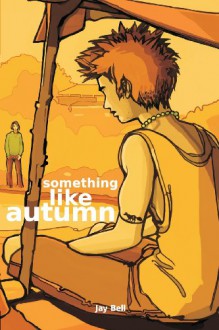 I've been rather lazy lately with writing reviews. I've just been either rating them instead or putting them off. Frankly, I'm enjoying my break from classes by just reading and relaxing. I think I've turned on my laptop maybe 5 or 6 times these past two weeks, or as little as possible anyway. But I thought I'd post my favorite books that I read in 2013 (not necessarily written in 2013 & in no particular order). Although, I think my all time favorite for the year is actually Something Like Autumn. Anyway, here they are, my top 10 - which was far more difficult to narrow down than I thought it would be. All but one are m/m. Imagine that. ;)

Honorable mentions: The Value of Rain, Hidden Away, The Final Line, Dance With Me, Angelfall, & Obsession.

I hope all of you had a great holiday, and that the new year treats you well.