Log in with Facebook
or
Wrong email address or username
Sign up
Already on BookLikes? Log in!
Incorrect verification code
Please, check your email, the code to access your BookLikes blog was sent to you already.
Enter code:
« Back Send
back to top
Search tags: Social-disaster

quote SPOILER ALERT! 2013-07-09 23:39
Deborah cleared her throat. “I, uh,” she said and cleared her throat again. “I had a, um, an idea. A different idea. About trying something in a slightly different direction.” She said it like it was in quotation marks, and indeed it was. All my careful coaching couldn't make her sound natural when she said it, but she had at least stuck to my carefully worded politically correct phrasing. LaGuerta raised an artificially perfect eyebrow. “An idea? Really?” She made a face to show how surprised and delighted she was. “Please, by all means, share it with us, Officer Ein—I mean, Officer Morgan.” Doakes snickered. A delightful man.

Silence. Utter, dumb silence. The silence of the cows. They didn't get it, the brickheads, and Deborah was not making them see it. She let the silence grow, a silence LaGuerta milked with a pretty frown, a puzzled glance around the room to see if anybody else was following this, then a polite look at Deborah. “Refrigerated . . . trucks?” LaGuerta said.

But LaGuerta just nodded. “That's a very . . . interesting thought, Officer,” she said. She put just the smallest emphasis on the word officer, to remind us all that this was a democracy where anybody could speak up, but really . . . “But I still believe that our best bet is to find the witness. We know he's out there.” She smiled, a politically shy smile. “Or she,” she said, to show that she could be sharp. “But somebody saw something. We know that from the evidence. So let's concentrate on that, and leave grasping at straws for the guys in Broward, okay?” She paused, waiting for a little chuckle to run around the room. “But Officer Morgan, I would appreciate your continued help talking to the hookers. They know you down there.” My God, she was good. She had deflected anyone from possibly thinking about Deb's idea, put Deb in her place, and brought the team back together behind her with the joke about our rivalry with Broward County. All in a few simple words. I felt like applauding.
Social disaster
Like Reblog Comment 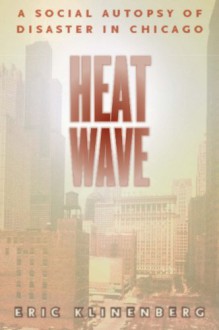 A mixture of sociology, epidemiology, and personal anecdotes of those who survived or died during a heat wave in a modern US city. Very moving, and does an excellent job of convincing the reader that social isolation and a lack of support for vulnerable populations (most particularly, the elderly poor) kill.
Like Reblog Comment