Log in with Facebook
or
Wrong email address or username
Sign up
Already on BookLikes? Log in!
Incorrect verification code
Please, check your email, the code to access your BookLikes blog was sent to you already.
Enter code:
« Back Send
back to top
Search tags: UnWholly UnWholly, incredibly, manages to dig deeper and raise new questions around its alarming premise. While profiling a couple more heroes, its assessment of humanity and society remains fairly bleak. The events at the end of Unwind prompted a condensing of the period of legal "abortion" of unwanted teens from 13-18 down to 17 as the cap. Unfortunately, this seemingly positive development assuages public guilt or concern and prompts a wave of intensive marketing and PR to promote unwinding troublemaking teens. A decidedly dystopian conspiracy (several, really, but one 'originating' one) put a new spin on this dark future, and heroes from book 1 get a chance to develop and grow further, while new characters are introduced. It's a marvel that Shusterman can juggle so many characters, viewpoints, and plot threads so masterfully to craft a tense, intelligent, troubling, yet entertaining thriller-paced novel. 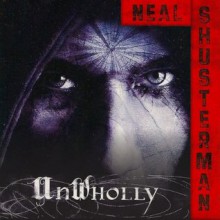 **If you haven't read Unwind, there may be spoilers in the following review.**

Book 2 in the Unwind series continues to follow the story of Connor, Risa, and Lev along with a few new and interesting characters. There's Nelson, a "parts pirate," determined to track down Connor and turn him over to the Juvenile Authority for "unwinding," Starkey, a power hungry kid who wants to usurp Connor and take control, and even Cam, a teenager created using the parts from various unwound kids. They call Cam a "rewind" but he is like Frankenstein and he doesn't even know if he is "real." The chapters alternate between different character's POVs and the narrator does a good job giving them different voices and personalities. In between chapters are actual news articles about organ harvesting and abandoned and "feral" teens. (The only thing annoying about that is hearing the narrator spell out the entire websites where the articles are found, something you wouldn't have to read yourself and would probably gloss over.)

This series continues to twist your expectations in new ways. I loved this just as much, if not more than the first one. The plot twists at the end made me jump right into book 3.

So . . . I stayed up all night to finish this book. I was completely useless the next day, but I regret nothing. That ending is awesome.

UnWholly picks up about a year after where Unwind left off. Connor, Lev, and Risa have gotten the world to pay attention to unwinding, but now they don’t know who to trust. Some people want to help them; others just want to collect the bounty on their heads. No place—not even the airplane graveyard in the Arizona desert—is safe. This book introduces three new characters. Starkey is a teen who’s obsessed with becoming just as famous as Connor. Miracolina wants to be unwound. And Cam . . . is a human made entirely from the body parts of other humans.

One of my biggest issues with the first book is that I didn’t buy unwinding. It doesn’t seem like a practical solution to any problem. This book adds enough worldbuilding that unwinding becomes slightly more believable. The story shows how this futuristic society is collapsing and the fear that people have of “feral” teens. Unwinding is big business in this world. Greedy medical companies are trying to make unwinding bigger, better, and more necessary. I really appreciate the worldbuilding because I felt like it was lacking in the first book. The new worldbuilding also takes some of the focus off of the abortion debate, which could be good or bad, depending on how you feel about the abortion stuff in the first book.

“The sad truth about humanity . . . is that people believe what they're told. Maybe not the first time, but by the hundredth time, the craziest of ideas just becomes a given.” - UnWholly

We need to talk about Cam. After I finished the first book, I started wondering if it was possible to use unwinding technology to build a whole new person. I wasn’t surprised when that’s exactly what happens in this book. I was (weirdly) hoping it would happen. Cam is the character I wanted. He’s fascinating. He’s super-naïve and super-intelligent at the same time. His brain is made up of pieces of other people’s brains, so he has an interesting way of thinking. What’s even better is that he encourages the reader to think. What, exactly, is a human? Is it possible to be more than one human at the same time? If Cam was created instead of born, is he property? How ethical/necessary is it to improve the human body?

Cam replaced Lev as my favorite character in this series. I still feel bad for Lev because he’s so young and has had to put up with so much crap, but Cam is what makes me want to read the next book.

I’m going to continue with this series, but I didn’t like this book quite as much as the first one. Compared to Unwind, UnWholly starts off very slowly. It took me a while to get into it. Also, UnWholly feels like a recycled version of Unwind. Actually, “recycled” is probably the wrong word. Let’s say that Unwind was unwound and then rewound into UnWholly. Some of the new characters are very similar to the old ones. Miracolina is the new Lev. Starkey is the new Roland. The characters are still dealing with the same problems as in the first book. This book doesn’t feel as original as the first one.

Despite the “rewinding” issues, I’m eager to continue with the series. I want to know what happens next.

Chocolate. You have so many memories of chocolate.
Some of your memories are of being deathly allergic to it, some are of every birthday cake being chocolate. One of your memories is of your family never having enough money for it, except that one time, when your dad left, and your mum decided she needed to do something extra special to cheer you up. You’ve dreamed of it ever since. But at the same time, you’ve never had it before.

It takes a while to work out the words, because you don’t see things the way others do. All at once you have so many memories, but none at all. Your synapses fire in a different way, as your brain tries to bridge the gaps between different parts of your whole.

Slowly the pieces are coming together… literally.

And, now that thinking is becoming a little easier, a little less fuzzy, you’re finding words come to you more easily. You can find the word you want without having to cycle through all the images and feelings you associate with it first.

You’re the next stage of humanity, the best of the best, and you’re only going to become better with each passing day, as the scars fade, as all the tiny parts of you figure out how to run smoothly together.