Log in with Facebook
or
Wrong email address or username
Sign up
Already on BookLikes? Log in!
Incorrect verification code
Please, check your email, the code to access your BookLikes blog was sent to you already.
Enter code:
« Back Send
back to top
Search tags: Webcomics

I came across this on Twitter and wow. I'm not familiar with Starline Hodge and her comics, but the gist of the story seems to be that someone contacted her about publishing physical copies of an unfinished webcomic of hers. She said that she didn't want to do that since the comic was unfinished. He decided that she just hadn't thought the idea through enough, so he created physical copies himself through CreateSpace, going so far as to get ISBNs for them, tracked down her home address, and mailed them to her. This was a surprisingly cool book. First published as a Kickstarter project in diversity in comics/graphic novels, the format is like a short story compilation, with dozens of artists weighing in for 2-6 page comics in wildly different styles.

Disclaimer: I received a copy via Goodreads Giveaways, which doesn't require reviews but more-or-less hopes to stimulate them. Mission accomplished; I'd never have come across this book on my own, but I'm glad to have discovered it!

Some of my favourite entries told a story with only images, no text/dialogue, or dug into heartwarming/tearjerker tales of children and families. Every story is space themed, so aliens, space travel, exotic alien worlds etc. There are just a few text stories as well interspersed throughout.

Most stories were more artistic, by which I mean they explored a theme or presented ambiguity in a fairly delicate way, while just a couple strayed pretty far into the preachy/heavy-handed side of making a point, but taken overall it was an enjoyable (and at times, impressive) read.

Mostly safe for kids/families IMO - the 'diversity' aspect included author backgrounds and various races (+ aliens, of course) being depicted, and while there were at least a few LGBTQ+ relationships depicted or implied, there wasn't sexual content shown beyond kissing. And violence was minimal; more implied than graphic. Parental guidance recommended, I guess.

In terms of format, the dimensions are huge, floppy, coffee-table format with big, glossy printing. Very cool to see the comics in that format, rather than on cheap, tiny paperbacks or on a screen - but also a little awkward to read. Think artbook rather than beach read; it's not going to fit in your pocket.

Overall, an impressive effort, and it's great to see people stretching boundaries and investing to bring work like this into print. 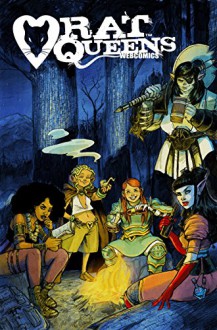 The webcomics were undoubtedly written for the fans, and while I've heard good things about this series, I am not yet a fan.  I need to read it before I make up my mind, to be honest.   And I'm on the fence about reading this given the fact that the artist abused his wife, then they got a female artist, and she was dumped to bring back the original artist.   While she says she expected it might happen, it was the way she was treated in order to bring him back that sticks in my craw.  And to be honest, I'm always suspicious of strong female characters written by men who casually shrug off this kind of behavior.   Just how much can they get into a woman's mind if they are willing to forgive a friend or co-worker who is abusive?

This series felt okay for a couple reasons: it was free, and it was written by different people.  It might give me a sense of the world without having the icky feelings that reading something illustrated by this artist, or written by the man who absolved him by accepting him without blinking an eye, would bring.

But unfortunately this was incredibly short, as were the stories.  They were nonsensical because I needed to know the world, I suspect, to fully appreciate them.   And while I still adore the word 'fuckbuckets' - which, yes, was uttered - and the way in which the women ogled a sports team, turning the hyper sexualization and objectification of women in comics on its head, I always felt a little left out of the joke.

Fun, but I wouldn't suggest reading unless you were a fan already.   But if you are, I suspect you'll enjoy this - although it's hard for me to say for the obvious reasons.   My suspicions are made based on the fact that this seems to be very much like the series based on what I've heard about it, though. I’m going to be doing a bunch of rereads for now. I’m not up for full length books yet.  Just FYI. I still need my commute time to focus on music which is helping me cope. Eventually I’ll be back to books but for now. I’ll get in small amounts of reading when I can.

Still an amazingly gorgeous hardcover book.  The first chapter doesn’t give much info on what is going on. It just drops you sort of into Antimony’s life.  This is my second read so I know what is what but I can imagine the first chapter could be a little off putting (though reading my original review I didn’t seem put off by it).  I still love the art. The story is just as fun as the first time around. I like Annie's relationship with the ghost Mort. Chapter 10 again is really cheesy and I didn't like that one too much. It was ok but I prefer hearing about the school. I ended up really liking chapter 13 this time around which the first time I thought was weird. I also found the last chapter hard to follow.  But over all I’d still give this 5 stars. Love this series.