Log in with Facebook
or
Wrong email address or username
Sign up
Already on BookLikes? Log in!
Incorrect verification code
Please, check your email, the code to access your BookLikes blog was sent to you already.
Enter code:
« Back Send
back to top
Search tags: aditi-khorana 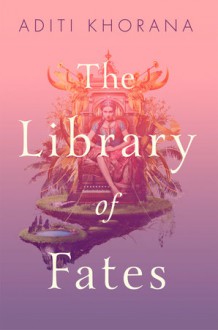 The thing with book comparisons is that sometimes you are left wondering if they didn't get the wrong book... like when someone decided to say that the Star Touched Queen, was the perfect read for people who loved Calaena, "I am going to kill you all... not"
PLEASE. -_-

Look, I am a avid Star Touched Queen fan. I loved the writing, the story, the whole Indian mythology; that means that I had sky rock expectations for this story which as you guys can see for the rating, were completely crushed.

I understand that the writer wanted to keep Amrita faithful to her background; as such she sounds very naive and young... well, at certain things, but with the consistency of a mousse, the girl became extremely annoying to "deal" with.
Also, almost right from the start, the author decides to get the girl a romance with her bff, so there can be some cannoodling.

The passage from best friends to best friends with benefits was extremely fast, which made it even more difficult for me to care about those two.
In fact, the whole "romance" felt more new adult than actual YA, something that I found strange.

The writing...well it is readable, but not that great. Not Star Touched Queen great, so if you didn't like STQ's writing, maybe you'll like this one :D

The plot
Evil dictator _ pleonasm much?_ visits Amrita's kingdom with the intention of gaining control of some obscure substance ; honestly, I could have used more info here.
Soon enough, Amrita decides to be a bargain chip between her father's kingdom and evil dude, Sikander (actually an old friend of her father), gifts are exchanged, and Thala appears.
Thala is what made me keep reading, she is a seer and a slave owned by Sikander. Maybe if the story had been all about her, I wouldn't have felt like I had eaten some sour lemons by the end of the story...
As for Amrita, most of the times I just wanted to shake her and tell the girl to start moving!
But with no actual plot,

everything just dwindled to "special ones"characters Amrita of course, guys, because apparently the bff

just wasn't the one... not compared with reincarnation bs, which once again makes romance development unnecessary!

Then there was the

, that felt... strange, lacking and lazy.
Honestly this was just too much of a mess for me.