Log in with Facebook
or
Wrong email address or username
Sign up
Already on BookLikes? Log in!
Incorrect verification code
Please, check your email, the code to access your BookLikes blog was sent to you already.
Enter code:
« Back Send
back to top
Search tags: alcoholic-parents 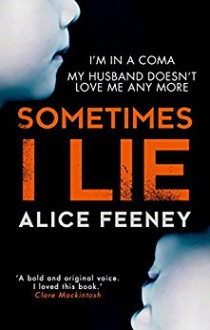 Content warning: this book contains multiple instances of sexual assault, a couple of which are on-page.

This story is told in chapters set in three different time periods: Amber's present, Amber's recent past, and childhood diary entries. Amber wakes up on December 26th to discover that she is in a coma, unable to move or speak but occasionally able to hear what's going on around her. She has no memory of what happened but is convinced her husband had something to do with it. For whatever reason, he no longer loves her, although he seems to be doing a good job of pretending to be a devoted husband whenever he visits her at the hospital.

Just a few days prior, Amber was limping along in her job as an assistant at a radio show. She's been given an ultimatum: either figure out how to get the voice of the show, Madeline, to like her, or she'll no longer have a job come January 1st. Amber decides to take a different route. Through carefully planted social media posts, anonymous notes, and a few other efforts, she'll convince Madeline that she's about to be let go instead. While Amber is doing all of this, her personal life is in shambles. Her husband is behaving secretively and may be having an affair with Claire, her more beloved younger sister who lives right next door. This makes meeting up with Edward, an ex-boyfriend, more appealing than it maybe should be.

A few weeks ago, my local book club voted on their next read. This is the book I voted for, although it isn't the book that was ultimately chosen. I decided I wanted to read it anyway. I basically gobbled it up, which is saying something considering how slowly I've been reading lately.

The more I read, the more horrible many of the characters seemed. Amber was consumed by jealousy. Later, I added "selfish" and "astonishingly lacking in empathy" to the list, although I did eventually come to feel sorry for her, at least until the very end. Claire, Amber's sister, was potentially a snake, depending on how much of what was going on was in Amber's head and how much was real. Paul, Amber's husband, seemed to only be interested in her in the most shallow of ways, although, again, everything depended on how much was real and how much was just in Amber's head. She wore different masks depending on who she was speaking to, and I found it difficult to believe that Paul had ever really loved her, since he likely didn't even really know her, not the real her.

From the very beginning, readers knew to expect that Amber would be an unreliable narrator. As she said at the start: "Sometimes I lie." I kept my eyes open for clues and was able to catch a few. I figured out, for example, how one detail mentioned in the diary could be true even as the existence of another character indicated that it had to be false. However, I only guessed part of what was going on. I've since realized that there was a great big clue that I'd missed. Could I have figured out what was going on sooner? Maybe, but I doubt it.

Although I disliked most of the characters, I couldn't stop reading because I wanted to find out how all the pieces fit together. I didn't get anxious about the characters' fates because, well, I didn't like them very much. One of the big twists near the end forced me to grapple with shifting perceptions of them, but then the ending happened.

While I agree that something needed to be done - a character shouldn't be able to win happiness that way - the very last sentence annoyed me. It seemed like the sort of thing you'd find in a slasher movie, a bit too much for this sort of book. It would have been more effective and believable to show that the character's own paranoia, doubts, and fears would one day eat them up and keep them from ever enjoying their happy new life.

I was originally going to say that one particular character's actions near the end didn't make much sense considering they'd been a follower most of their life, but I realized their actions did make sense...if, as it turned out, they were just as warped as another one of the characters, only in a different way. There's one line that I think was supposed to indicate that that was indeed the case.

All in all, this was a riveting read, even though it stumbled a bit in the end.