Log in with Facebook
or
Wrong email address or username
Sign up
Already on BookLikes? Log in!
Incorrect verification code
Please, check your email, the code to access your BookLikes blog was sent to you already.
Enter code:
« Back Send
back to top
Search tags: audioblast I read and reviewed this book awhile back and thought it was pretty good.

FLESH: THE DISAPPEARANCE OF PORTIA BARRINGTON by Keith Lee Johnson.

* I was provided this audiobook at no charge by the author, publisher and/or narrator in exchange for an unbiased review via AudiobookBlast dot com * 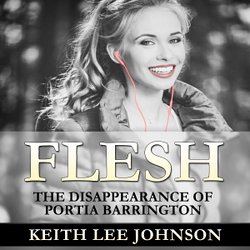 Portia Barrington is the 15-year-old daughter of a prominent lawyer.  Portia has been kidnapped and despite the ransom having been paid twice, the kidnappers have now made a third demand.  Something was very wrong and FBI Investigator Phoenix Barry has been called onto the case.  As Phoenix delves deeper into the kidnapping the twists and turns, as well as the suspect pool, keep growing.  As her investigation continues getting stranger and more convoluted Phoenix also has to deal with what is going on with her daughter who, totally out of character and for no apparent reason, has just beaten up a teacher at school.
This is the first book I have read by this author and the story had potential.  I grew interested in what happened to spoiled, promiscuous Portia but just as I was getting involved in the narrative the author would take a step aside and begin what I can only refer to as a "rant" about moral issues.  Mr. Johnson tried to incorporate it into the story as dialogue, but it just didn’t work.  The rants included everything from “how to be a good modern wife … work at your job but always be there for your husband” to long and involved stories about sexual abuse experienced by the characters – priests, nuns and volleyball coaches – seems no one was exempt from evil deeds.  Although these sidebars did have some bearing on the plot they were just too frequent and too long.  I want an entertaining story not a cautionary tale about the evils in the world.
Sometimes authors get caught up in using a favorite phrase, so caught up that it becomes distracting to the reader.  I once wanted to heave a David Baldacci book through the window because of how many times I had to read the word “army creds”.  In Mr. Johnson's book it happened to be a phrase I find distasteful anyway which only added to the fact that it jumped out at me every time it was used.  He could not refrain from using “get up in that” almost every time he wrote about sex.  Some good editing would have gone a long way to making this book about half as long and a much more enjoyable read.
As I said, it had potential and it was a good story idea.  I listened to this on audio – had I been reading it I might have skimmed over the “preachy parts”.  I did enjoy the book enough that I may try another book by Mr. Johnson somewhere along the way.
The book was narrated by Lucinda Gainey whose gravelly voice, I thought, was perfect for Phoenix Barry, so good casting on that point.