Log in with Facebook
or
Wrong email address or username
Sign up
Already on BookLikes? Log in!
Incorrect verification code
Please, check your email, the code to access your BookLikes blog was sent to you already.
Enter code:
« Back Send
back to top
Search tags: author-dayton-ward 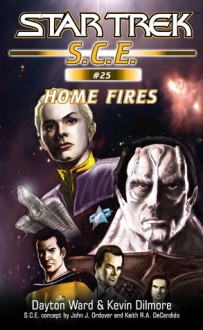 This is the first of the Wildfire-aftermath stories. It features Corsi, who along with Stevens, returns home and learns why her father has always been so biased against her joining Starfleet - because during the Cardassian war, Starfleet asked to install sensor equipment on his ship to spy on the Cardassians... What should have been a run of the mill-trade run turned into a standoff with Cardassians, and his brother, Corsi's uncle, had to pay for it.

This story deals with guilt, regret and prejudice (and of course, stupid mistakes which lead to tragedy). In the small-universe-syndrom one of the Starfleet operatives Aldo Corsi had to deal back then, was William Ross.

Corsi is doubting herself, because, while she was incapacitated, lots of her staff died on the daVinci, and Duffy had to make the ultimate sacrifice; and of course, Stevens just grieves for his best friend. Frankly, I'd have liked to see the focus more on Stevens instead of on Corsi, because I'd rather have seen a best friend deal with his very personal grief than stuck up, duty-bound Corsi deal with her professional regrets. I'm not saying that Corsi's grief doesn't come across as very real (and the background story about her father and uncle did touch me), but given the often stated relationship between Duffy and Stevens as best friends I think that not exploring that angle a wasted opportunity. There should have been more, even clichéd tears, whatever, but not just Stevens as a sidenote to shed some light on Corsi... especially not in this "aftermath"-situation. 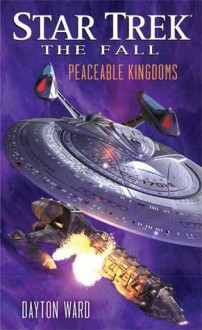 This is the conclusion of the "The Fall"-miniseries. And come to think of the series as a whole, I still question the decision why the parts aren't numbered on the cover. Especially here, it's an illusion to maintain the statement that every single part can be read on its own without prior knowledge - yeah, that may apply to "Shadow" (and Revelations since it's the first part), but to the others (especially Chalice and Kingdoms) not so much. So why not be upfront about it and put the reading order on the covers?

But back to this novel:

While it brought the series to an ultimately satisfying (if a bit predictable) conclusion, the only really engaging parts where the flashbacks and the introduction of the Cardassian doctor. Everything else (Enterprise being redirected, Starfleet ships pitched against each other, last minute-rescues etc) felt a bit repetitive after the other parts of the series. "Ishan"'s story was an interesting one, it shed light on the occupation, its cruelty in exploiting Bajor and the Bajorans, and it highlights its last days, the sort of burned earth-policy the Cardassians employed. But to be honest, I didn't quite understand the reason for the identity change in the first place since the Cardassians don't change Baras' features to match the original Ishan's and kill all those who could identify Baras (and the late Ishan) anyway. So while the actual twist worked well, the reason behind it seemed contrived and that wasn't really explored all that well. But then again, I thought it would go in a sort of Iliana Ghemor/Kira Nerys-direction...

I also liked the way that exploration should be back on Starfleet's agenda after all the political upheaval. That's what has been missing since well before the Relaunch-novels, as the 9 part series "A time to" that came before Nemesis also dealt with political upheaval and conspiracies on the highest level. So it's time to go "where no one has gone before" again.

Otherwise the novel spent pages upon pages repeating itself (and its predecessors) which let my attention wander a bit - never a good sign. I observed the need to endlessly summarize previous chapters in quite a few ST-novels (David R George is another author who employs that manner of story telling...) now, and I wonder why that is necessary as I don't think the readers are incapable of retaining the memory of what they've just read. Fortunately, the action picked up speed in the second half of the novel, but during the first half it was a real chore to wade through those repetitions. I think much of the space used for those "summaries" could have been used exploring the aftermath, Ishan's removal, Bajor's reaction, the actual election (even if the election of the Andorian candidate was a foregone conclusion), even the race to get the information back to Earth/Louvois. Riker's end of the story, his confronting Schlosser, even the part where they got Velk out, all that got awfully short-changed. Why not show the actual events instead of just mentioning them in a conversation after the facts?

So, overall this is a rather average novel - it was an entertaining story, but it could and should have been more. 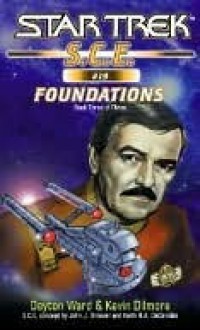 This is definitely the best part of the Foundations-trilogy which sheds light why the SCE-teams also contain cultural specialists, linguists etc.

Scotty again remininsces about a past mission where the SCE-team was confronted with a sudden first contact situation which easily could have gone wrong and got not only the team killed but also turned an alien species into an enemy of the Federation.

A much more straight-forward story without too much technobabble and repetitions. Just hope there'll be other stories with Mahmud al-Khaleed - and I hope the next parts will refocus on the crew of the da Vinci. 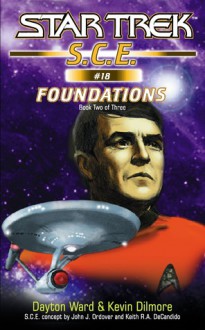 It took me about a year to finally finish this story - it's not a bad story, as it deals again with the crew of the Lovell and depicts the aftermath of the shut-down of the computer Landru, framed by a similar situation faced by the da Vinci's crew... but honestly, I found the prose difficult to connect with. I don't need endless repetitions in a 100 pages story. Things aren't quite so complicated that I can't grasp them the first time around. And I'm still waiting for some fleshing out of main characters - what does it say that al-Khaled is better portrayed than most of the protagonists (which saves this part its second star, mind you)? Granted, he had a good stint in Vanguard, and I absolutely liked him and his crew there, on the other hand, the da Vinci now had 18 short-stories and they are nowhere near any kind of complex characterization.

Just the thought of Wildfire, which is said to be a turning point within the series, is keeping me going right now. 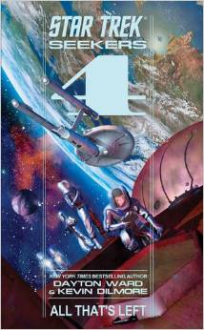 This book had an interesting premise - but unfortunately couldn't deliver because the focus was spent on fight scenes rather than working on resolving the situation. Which is a real shame.

Anyway, the Endeavour is called to a colony which is attacked by an alien ship. After seemingly disarming the ship an away party is dispatched to learn more. But instead of the empty ship they expect the away team stumble across an unknown species which returned to this planet after being driven off in the distant past to recover the remnants of their host species, who live cloaked in subterranean caves, in order to survive... and who now discovers the Endeavour's crew as a means to gain even more hosts.

When I read about the depiction of this alien species who attaches to the host's neck I immediately thought of Babylon 5 and the parasite in Londo. And even if the Lrondi's motives are basically ones of survival and cooperation, they don't ask, they just take hosts and influence them by either taking over the physical reactions entirely or at least inducing negative feelings when the host doesn't agree with the parasite - and also in the other direction force the hosts to see things their way, to tolerate and accept the collection by inducing good feelings - like a drug, I guess. Granted, their aims beyond collecting hosts are benevolent, they try to advance their host species' knowledge. So it's not that they just use their hosts' bodies... still when push comes to shove and they are forced to choose between their own good and that of their hosts, they'll choose their own. It's not equal partnership, it's just that the hosts are allowed to have some say as long as it fits with the Lrondi's agenda.

More than 2 thirds of this book are spent on thwarting the Lrondi's attempts at collecting the Starfleet personnel. On every other page officers's interal struggle of compassion for their captors and the struggle for freedom is depicted. But actually, I just don't get it. Because even those who could be liberated from the Lrondi still feel compassion, they still liked those parasites. Take Cole for example who still argues for the Lrondi Naqa, who actually still puts Naqa's well-being before Klisiewicz's, Naqa's current host. And I think the real story doesn't end with thwarting the attempt, it starts with the aftermath, getting over the collection for the hosts, essentially being violated, taken against your will and manipulated into feeling compassion for the Lrondi, but also trying to find a way for the Lrondi to survive, be it without hosts (which they are capable of) or with willing partners in an equal relationship.

In short, I feel cheated out of a good, potentially great story about overcoming oppression (even benevolent domination is still oppression) and reaching a mutually agreeable status quo between the Pelopans and the Lrondi. Instead I had to wade through length of repetitive story-telling that held virtually no suspense - because let's be honest, since we haven't heard from the Lrondi before, it's a given that they failed in their attempt to "collect" the galaxy in a large scale.

From a series point of view, I still by far prefer the Endeavour to the Sagittarius, but I really hope the whole series picks up speed because so far, it's been at most average.