Log in with Facebook
or
Wrong email address or username
Sign up
Already on BookLikes? Log in!
Incorrect verification code
Please, check your email, the code to access your BookLikes blog was sent to you already.
Enter code:
« Back Send
back to top
Search tags: dark-erotica Mercy by Lucian Bane
My rating: 5 of 5 stars

If you've seen my reviews you know that I use A LOT of gifs to convey my thoughts on a book. Mercy Mercy Mercy..

Mercy: A Dark Erotica had me feeling so many damn emotions til it just wasn't funny. I laughed, I cried, I had some WTF moments but most of all I felt EVERYTHING the characters were going through.

Sade is the sadomasochist tattoo artist who has his own world of issues.

Mercy has a wanna save the world and the troubled people in it type of personality with her own tote of physical and emotional problems. Their paths cross when Mercy finds a file on Sade that her dead father was keeping.

Mercy A Dark Erotica will KEEP you on the edge of your seat right from the first page. Trust me I had my popcorn ready when I saw the very first teaser and BOOM I needed it!!

So if you are ready for a raw, gritty, emotional book that will suck you in from the jump then you really need to read Mercy you will NOT be disappointed. Oh and OMG the ending let me just share with you my reading experience for the last 2 pages. I'm laying in bed its midnight and I'm almost done and I get to the last page and sit straight up in bed and yell "motherf**ker"! I had to read the last 2 pages 3 times to make sure what I was reading was correct and each time I finished motherf**ker was my only reaction. So I'm going to leave you with this gif. This book starts off with Honor, a.k.a. "Honey", in a seedy strip club.  She is the daughter of a mafia don.  She ran away from her fiancée, Byron, who was to take over the business. Byron was not a nice guy and did not treat Honor with any dignity.  She dealt with her treatment okay, but when Bryon wanted to force Honor's little sister to marry one of his smuck friends, that was the final straw.

If you've ever read Skye Warren, you know she writes some pretty power and dark stories.  This one starts out just as good as I as I've ever read. When I first opened this book, the first few paragraphs really hit me.  I knew this was going to be a good one.

I used to think there were things I'd never do. Never take my clothes off for money. Never sell my body. Never f*ck a stranger just to survive. I'd never sink that low.

But it's hard to die, to lie down and let it happen. Not to fight. Not to reach for the surface for air when you're drowning. It's almost impossible. I'm proof of that. I'm a living example of how low a person would go, if they have to. If they're desperate enough.

While at the strip club, one customer takes quite the interest into Honey. Kip pays for a "private dance", but as you can imagine, the private dances in this club were more than just dances.  They offered a wide array of other "services". Kip gives off the vibe of a really bad guy, but never really does anything wrong to Honey. He always pays her for her services.

Love the Way You Lie is a story full of intrigue as try to figure out who the good guys and who the bad guys are. There are bad guys and really bad guys. The story is hot. If you've read Skye Warren before, this story is fairly tame, but that doesn't make the story any less of a good story.

There are some great secondary characters in this story (my weakness).  There are two other strippers that we meet have a story that I hope will be told. The bouncer is another great character. He is one of the not so bad, bad guys. There is a prequel, Tough Love (free at time of this posting), about Honor's little sister, Clara. I hope that she gets her full story told.

I'm a huge fan of Kitty Thomas. I love her work, though it is not for everyone. It is dark erotica. Most of what goes on in this books are not for the faint of heart. There is kidnapping and dubious sexual consent. I do think they are extremely well written, and if you like the genre, you will really love these books.

Emily Vargas has been taken captive. As part of his conditioning methods, her captor refuses to speak to her, knowing how much she craves human contact. He's far too beautiful to be a monster. Combined with his lack of violence toward her, this has her walking a fine line at the edge of sanity.

Told in the first person from Emily's perspective, Comfort Food explores what happens when all expectations of pleasure and pain are turned upside down, as whips become comfort and chicken soup becomes punishment.

Mina Calloway always finds herself in the hands of the wrong master: Gentle at first, then brutally sadistic and abusive. She no longer believes it's possible to find a man who will be gentle with her. After seeing a kink-friendly therapist for months, the doctor makes her an illicit offer she isn't yet smart enough to refuse: "Let me find you a good master."

Brian Sloan is a borderline sociopath with a dark and brutal past. Only taking his sadistic urges out on the women at a submissive training house allows him to sleep through the night. When Brian sees Mina, she should be ripe for the picking, but her damage is too similar to his own. Can he fight past his demons to protect the one person he considers worth saving?

Note: This book happens in the same world as Guilty Pleasures with reoccurring settings and characters. However, it is not a direct sequel and it isn't necessary to have read Guilty Pleasures first. If you enjoy this book, however, you may also enjoy Guilty Pleasures by Kitty Thomas. Kitty Thomas delivers yet another twisted tale like only she can.

This story starts out with Mina being thrown out by her abusive Dom/boyfriend.  He has forced her to move in with her and quit her job, so she has no where to go and no money.  You can see the desperation that she is in. The story then jumps to several months later when she is talking with her therapist, Lindsay Smith. Mina made it a point to find a therapist who was into the world of kink and BDSM so that they would understand where her needs came from. Mina was very surprised when Lindsay turns out to be a man and not a woman. Lindsay has a solution for Mina, but will it make things better or worse?

Brian is a sadistic sociopath.  He works with several others training women to be sold as sex slaves.  The women come willingly, if not through a little coercion.  Once they are in the program, there is no leaving.  Brian is the one who does all the dirty work.  Not only is he the one who takes on the task of punishing the subs who are out of control and need more punishment than the other men are willing to do the women.  He also takes care of any other issues when someone knows more than they should.  He has killed more than once to protect himself, his partners and the business.  Everyone is scared of him, the subs and his partners.

Both of these characters are broken.  Both for different reasons.  They each have their own way of dealing with their issues.  When I met Brian in Guilty Pleasures, I was really surprised when I heard that Kitty was writing him his own story.  I knew she liked to play with readers minds, but Brian gives new meaning to crazy.  I should've had more faith, Kitty knew exactly what she was doing.  The way that Brian was able to deal with Mina and her exact issues was perfect.  Don't get me wrong, Brian is still not a nice guy, but I do have more of an appreciation for his ability to not be a dick all the time. I actually liked him much more than Mina who whines a lot. I know she has had it tough, but she is wishy-washy in that she wants to leave and then isn't happy when she is allowed it. She won't make up her mind what she wants.

If you've never read a Kitty Thomas book, there are a few things you should know.  Her stories are dark.  There is a bunch of mindfuck that goes on in them.  While they are listed as erotica, there isn't sex scene after sex scene after sex scene like some erotica books.  She messes with your mind much more than she writes gratuitous sex scenes.  I think that is one reason I love her work so much.  The depth in the stories and the characters is truly amazing.  She will push limits and a lot of what is done isn't consensual. If you like your stories dark and provocative, then Kitty Thomas is the author for you. 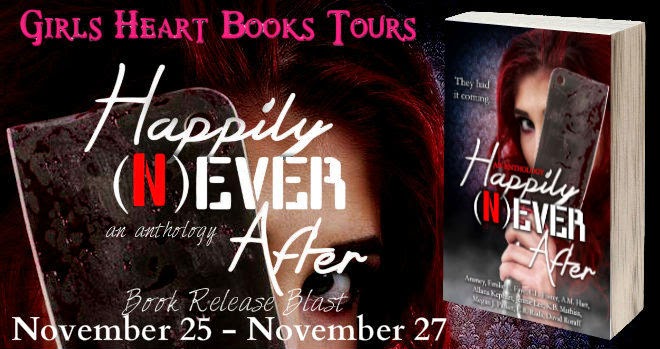 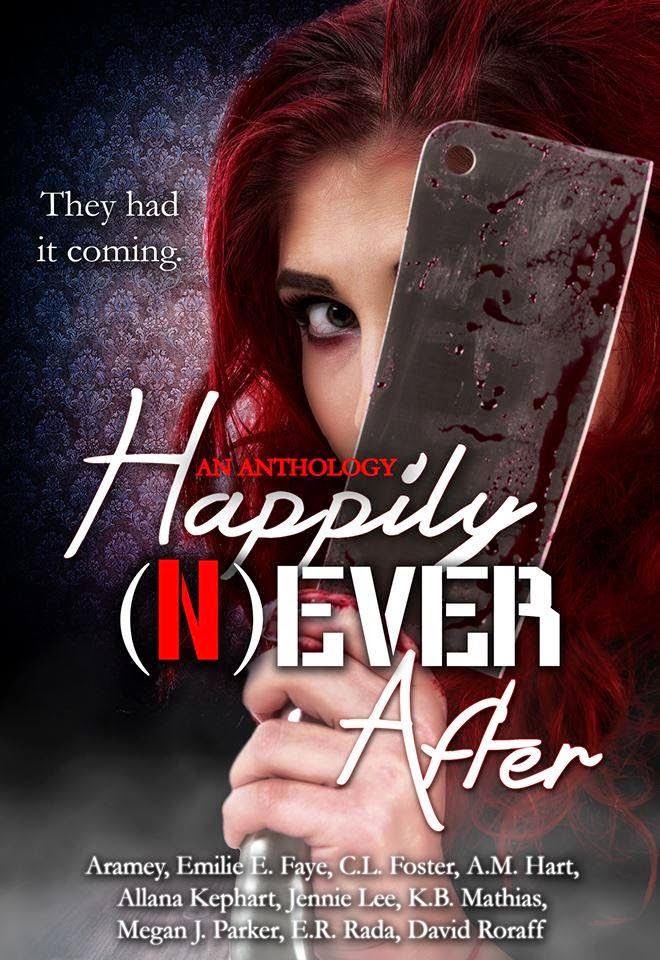 Happily (N)Ever After- An Anthology
Authors- Aramey, Emilie E. Faye, C.L. Foster, A.M. Hart, Allana Kephart, Jennie Lee, K.B. Mathias, Megan J. Parker, E.R. Rada, David Roraff
Publication Date- November 25th, 2014
Sometimes you are lucky enough to dodge a bullet...but sometimes it strikes straight to the heart without an exit wound. It rattles around, leaks out our trust, and brings us to our knees making us wonder; why the %&$@ did I date you!?
From the darkness of emotional and/or physical pains we crawled out and eventually found a way to dust ourselves off and carry on with life.
So let these stories serve as a guide, that all that glitters is not always gold. That the felling of the hairs rising on the back of your neck is a warning, a primal scream to let us know that some things are not as they seem. Trust your gut. Yes, some people are worth fighting for but others have somehow tricked us into seeing a wolf in sheep’s clothing.
With hindsight fully engaged, we can now see the clarity of our past and appreciate the lessons we learned in our very own happily never after.