Log in with Facebook
or
Wrong email address or username
Sign up
Already on BookLikes? Log in!
Incorrect verification code
Please, check your email, the code to access your BookLikes blog was sent to you already.
Enter code:
« Back Send
back to top
Search tags: dead-roses

This collection contains my novella, Loving the Goat. If you ever wondered what that might be like, you can give it a try for only 99¢! 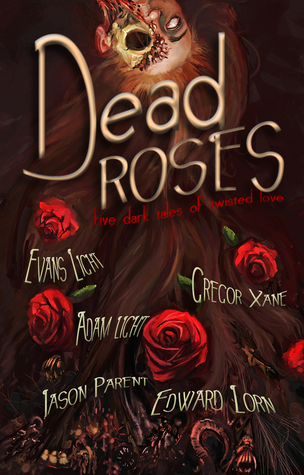 While all of the stories in this collection are well-crafted in plot, characters, and style, I enjoyed some more than others. My favorite was Love Lies in Eyes by Evans Light (though I would have liked it even better without the bit about the eyes). If you’ve ever felt that all the new lovers in your life keep turning into your ex, read this.

Jason Parent’s Eleanor is the most horrifying of this horror collection. There’s no supernatural element and no humor. It’s vivid and relentless. Panacea by Adam Light starts strong but I found the ending a little predictable. I had trouble relating to Cinder Block by Edward Lorn because of the layers of movie references, but I expect that most people have seen those movies and for them it would be a stronger story. It’s definitely disturbing. Gregor Xane’s Loving the Goat is every bit as bizarre and “who could have thought of that?” as his other stories. The weird depths of this man’s imagination are endless. I have a strange and powerful aversion to comic books—even reading about them is like nails on a blackboard—so I can’t say I enjoyed this, since it relates to them. But that’s my idiosyncrasy. It is written with his usual polish and originality.

There are two copies of Dead Roses: Five Dark Tales of Twisted Love to be won over at Goodreads. If you still use that site, you might want to consider hopping over and entering to win. Today is the last day to sign up.

What do you get if you win? A handsome trade paperback containing the following stories:

When Father Stuart McKenzie finds a disfigured girl abandoned on the steps of his church, he decides the child is a blessing from God and raises her as his own. But the special needs of Eleanor demand more from Stuart than a father can give.

Nathan falls for a beautiful girl from across a crowded room, but she disappears before he can muster his courage. Obsessed with getting a second chance, he’s about to learn that true love isn't only hard to find...it can be hard to lose.

Decades of marriage haven’t tarnished Rob’s affection towards his dear wife Molly one bit, and he’s not about to let cancer snatch her away, no matter the cost. But every medication has its side effects, some more than others.

Toby’s dad may have hit the road long ago, but his mother still loves him - along with every other man in town, that is. But after the beautiful Lauren shines a light into his dreary world, he realizes just how crazy love can get.

LOVING THE GOAT, by Gregor Xane

Embattled comic book artist and notorious animal lover Bill Capra is willing to do anything (literally) to get his dirty paws on the fabled object of his desire, even if it means his own destruction.

(This book contains adult content and is suitable for mature readers only.)

There will be goats!

Evans Light, the contributing editor behind the Bad Apples and Dead Roses anthologies, broke this news on his Facebook timeline yesterday.

I quote: "Filming has apparently begun on the adaption of Gregor Xane's story in DEAD ROSES. It has begun!" 1/5 stars
*Disclaimer: I received a copy of the book from Netgalley in exchange for an honest review.*

I saw this book on Netgalley and thought it sounded interesting. After looking into it a little it was really high rated and all the reviewers were raving about how well written and enjoyable it was. I think we must have read different books because my experience was much different. I didn’t like the book at all and I actually took to doing anything and everything I could to not have to read it. A read that should’ve been a few hours took me 3 days. I actually cleaned out both my room and my email inbox to get a break from reading this.

The only time I was even semi-interested was reading the second Roses are Red poem, and the next sentence ruined it. Are you seriousing me right now? Yes, Yes I am. That sentence snapped me out of the momentary enjoyment the story provided. The dialogue was unbelievable at times, and actually painfully difficult for me to read.

The book was in desperate need of some editing. It was riddled with repetitive paragraphs, poor word choices, and just bad writing in general. With editing the story would be a ton better but I honestly don’t think I would have given it more than one star even with the improvements. Monica-Marie Vincent’s writing style is not my cup of tea at all. I don’t think I’ve ever disliked a book so much, and wished it would end so badly.

Don’t read this book if you dislike vulgar language. It used cussing to hide the fact that it wasn’t well written. There was a minimum of a cuss word per page. With unbelievable dialogue, annoying characters, a serious need for editing, and being predictable in every aspect I can’t recommend this book to anyone. I don’t believe I will be reading any of Monica-Marie Vincent’s future novels.