Log in with Facebook
or
Wrong email address or username
Sign up
Already on BookLikes? Log in!
Incorrect verification code
Please, check your email, the code to access your BookLikes blog was sent to you already.
Enter code:
« Back Send
back to top
Search tags: evil-kittes! 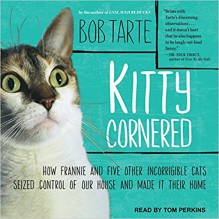 Look at that cover and those crazy, crazy eyes and tell me you could’ve resisted!

This is a cute audiobook about a man who insists he didn’t start out as a cat lover. Yeah, yeah I’ve heard that story before! He never really had anything against them but his parents preferred dogs. He was also scratched pretty badly as a kid but never held it against the entire species. His take ‘em or leave ‘em feelings towards them changes when he marries an animal lover named Linda and suddenly their house is filled with birds, other assorted animals and lots of cats. Six of them by the very end and he clearly loves them all.

He recalls how all of these cats came into his life and the stories are sweet, funny and, whew, sorrynotsorry for the spoiler alert, none of them die! I have to tell you, I was extremely worried about that but he ends the book before that ever happens. If you’re an animal death wimp like me you can feel safe reading this one.

I think any cat lover will enjoy this audio but you really do have to be a fan of the feline because it’s most definitely a cat person book. The writer is a neurotic man who only wishes “to stay in a good mood for longer than hour”. If you can relate, you will enjoy him and his many idiosyncrasies. He reminded me a bit of Eeyore and that is okay. I enjoy reading about other people’s problems and their naughty pets. It makes me feel better about my crazy bunch who have shaved years off of my life with their cord chewing, string eating, demonic ways. So, while there is nothing earth shattering here and it didn’t make me laugh out loud (but nothing does, really because I’m a crab), it’s an amusing and pleasant, stress-free way to spend a few hours.

The audiobook I listened to was narrated by Tom Perkins and he is a pleasure to listen to for hours on end. You know I’d tell you if he wasn’t!

*I received this audio from Tantor Media a shamefully long time ago. Thanks, Tantor! 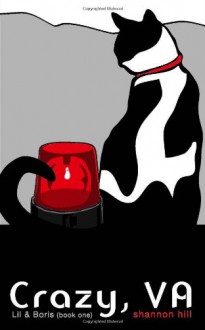 This is a cute little story that clocks in at only 168 pages but for some reason it seemed much longer.  It’s probably my fault. I kept picking it up, getting distracted and putting it back down. It took me well over ten days to finish it up. That’s not even 17 pages a day and that’s shameful.

“Crazy, VA” is Book #1 and sets up the Boris & Lil series which is about a town that lives up to its name. Crazy has only 300 residents but many of them are involved in a long-running feud between the two founding families. Lil, the only police officer, is the offspring of a love match between the two families. She’s an outsider because of it, basically disowned by both sides and has to fend for herself. Lil has become a strong, self-sufficient sort despite or because of this. I liked Lil a lot. She’s smart and tenacious and I refuse to write a bad word about her because early on she takes in a feral cat, names him Boris and deputizes him.

What’s not to love about that?

Honestly, the parts with Boris were the best bits of the book for me. This woman knows her way around a cocky cat and their relationship was charming.

“I lay on the floor. Boris trod on my bladder a few times for fun, and settled in for a long session of sucking his toes clean. I envied him. It would be a great life if my biggest worry was slurping the dirt out from between my toes.”

The rest of the book, though? Meh, I could take it or leave it.  One of Lil’s many cousins (whom she doesn’t know) dies in a murderous way and a mystery ensues. Many characters are introduced, many of them snotty, have their say, and are never heard from again. They may pop up again in the sequels but here many of them seemed, I don’t know, unnecessary? Yeah, that fits. So Lil is the only one really digging into the case and the book follows her attempts to discover who killed her cousin and a little later why they did it (more on that in a sec). We get to know Lil, Boris and Lil’s aunt well enough but the rest of the characters weren’t fleshed out too much and there’s too many of them for my liking.

Most of the book is amusing but there were a few things that bugged me. There’s a really strange scene featuring Boris’s previous owner that I think should’ve been snipped. It made no sense to me other than to point out how awful people can be to pets.  I already know all this, as does anyone familiar with rescues or those tear-jerking Sarah Mclachlan commercials, and I didn’t appreciate the nonsensical scene pounding me over the head with its message (even though I completely agree with it). It aggravated me more than anything. The other BIG thing that bugged me was the ending. The entire book appeared to be leading up to a big reveal regarding the true motive of the killer but then it just ends. IT JUST ENDS. What?! I know it’s realistic but damn it I need some closure after all of that buildup and sleuthing! I even read the last few chapters twice because I thought I missed something.

So I’m giving this one a 3. It’s worth reading if you love feisty cats and light-hearted reads without a lot of sex and gore.  I loved some of it, felt “meh” about some of it and disliked a bit of it.  I loved Boris and may even pick up book #2 to see what he’s up to but I’ll probably forget the rest of this story as soon as I post this.